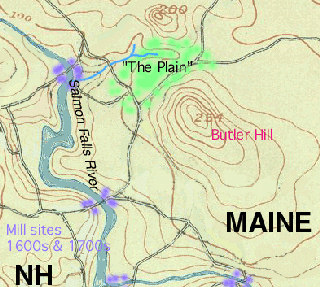 In the earliest years of settlement, from the mid-1600s to about 1800 and before South Berwick was a separate town, people of the old town of Berwick had a different settlement pattern than we have today.  Most clustered their homes on the rivers near the waterfalls that were sources of power for lumbering and gristmills—areas marked in purple on this topographical map at left.

The first church and Old Fields Burying Ground, near the intersection of Brattle and Vine Streets and Old South and Old Fields Roads today, marked the center of the community in those early days.

The part of town that is now downtown South Berwick stood back away from the water.  Here a few scattered farms exploited the gentle terrain facing southwesterly from two natural hills rising above the east side of the Salmon Falls River. There were natural springs, and a little creek, and it was nice and flat – a plain. Documents show that residents referred to the area as “the Plain” till at least 1829:

“Pursuant to a Brigade order of September 21st, A.D. 1829, Capt. Samuel F. Staples will parade the company under his command on the plain near The Revd. Mr. Boyd's Meeting house in South Berwick, on Wednesday the fourteenth day of October next, at Seven o'clock in the forenoon, armed and equipped as the law directs for military duty, review and inspection: and there await the orders of the Adjutant of Said Regiment. Capt. Staples will make written application as by law directed to the Select Men of the town wherein his Company belongs for the rations to which they are entitled. The Regiment will be ready for the reviewing officer at nine o'clock in the forenoon.