This building is part of the South Berwick Village District on the National Register of Historic Places. The St. John Lodge of the Fraternal Order of Masons organized in 1827 and probably built it as a Masonic hall, then with a different roofline than it has today. A few years later the hall also held worship services for the new Free Will Baptist Church, while parishioners built their meeting house across the street. During the 1850s, following a fire at Berwick Academy, classes met here for two years. This building barely escaped the great South Berwick fire of 1870. William Huntress, who had a cabinetmaking shop here many years, was among many businesspeople and tradespeople using this address—including, in the early 1870s, the post office. In the late 1880s, the building was remodeled and a third story added. For many years in modern times it has housed the offices of the surveying and engineering firm Civil Consultants.

Early history. “St. John Lodge, No. 51, F. A. M., was chartered Feb. 13, 1827,” recounts the 1880 History of York County regarding the founding of South Berwick’s local chapter of the Fraternal Order of Masons.

Probably at about this time, they constructed a three-story Masonic hall. The photo excerpt shown at right, probably taken about 1880, shows its original gabled roof.

From 1851 to 1853, after Berwick Academy’s only school building was destroyed by fire, classes met in the second-floor meeting space overlooking Main Street.

“School continued to keep while the new building was under construction,” writes Marie Donahue in Old Academy on the Hill. “Preceptor Auren M. Payson and his staff conducted classes… Maria L. Ricker, reminiscing about her years at the Academy…, recalled this arrangement and some of the problems it posed: ‘Entrance to the second story was on the side nearest the Whitehead store about half the length of the building block from the Main Street. A broad stairway led up to an anteroom opening at the right, occupying the space across the entire front of the block. Windows on three sides gave us plenty of light and air, rather too much heat on hot summer days, for then school [only] closed the first week in August, and here I recall Mr. Payson’s kindness in allowing the girls in my class to take our books out under the trees in front of Mr. Frederick Down’s residence (his daughter Mary Ann was one of us) and study our lessons.’”

Over the years, a number of shops and trades occupied the building. Resident Edward B. Pike recalled that Leonard Colcord had a cabinet-making shop there, probably before the Civil War. “The rear end was a tenement occupied at different times by various tenants.”

The Huntress Block.  During the 1850s, in the years just before the fire, the building became known as the Huntress Block. The map of 1856 (excerpt at left) shows that a cabinet manufacturer named W. Huntress had replaced the Colcord shop. Edward Pike said the Huntress workshop was in the upper story. He may have been William Huntress (middle initial M. or W.) who married Dorothy Butler in 1823. He was apparently related to the Simeon P. Huntress (1844-1923) who later owned Eagle Stables on Portland Street and, in 1886 before the advent of electric trolleys, operated the York Beach Daily Stage Line, a horse-drawn carriage service to the beach.

During the fire of July 1870, the building barely escaped destruction. “The fire …burned all the buildings on that side of the square between the Post Office [then in the former Parks Store] and Masonic Hall building,” recounted the Dover Enquirer of July 28, 1870. Eyewitness Rebecca Young wrote, “All the occupants of the stores, and small tenements above them, tried to take their goods to places of safety with little success … Mr. Morrison, who lived in the Huntress block, relates that he carried his household goods to a safe distance, made his cow fast in the orchard, tied his pig to the fence there by its hind legs, leaving the little ones in the pen to die, if die they must, and used his horses for the benefit of those in need. The house was not burned and all were peacefully sheltered the next morning.”

After the fire the Masons, who in 1869 had split into two chapters, according to the History of York County, seem to have ceased to use the building. Instead, in 1871 the St. John’s Lodge built a new Masonic hall upstairs in the southernmost section of the new Business Block.

In the early 1870s, following the fire, the Huntress building contained the post office. Edward Pike said, “Later the Post Office was located there for several years under Dennis Ferguson whose daughter Mattie was the efficient clerk.” The Fergusons then lived in the William Lambert House on Portland Street. Soon the post office moved to the building known as Parks Store. (The post office had previously been in the Frost Store, 2 Portland Street.)

The Ross Block.  The building we see today took shape about 1880. A fire is known to have taken place there in 1889, according to the South Berwick town report of 1891. The remodeling included a roof modification with the addition of a full third story. At the same time the front of the building appears to have been moved back from the street, foundation and all. The rear foundation was also moved back, so the size of the building's footprint remained the same.

The sides of the building -- walls, windows and foundations -- are likely the originals from the late 1820s. Mary Jewett recalled that after the Huntress cabinet shop left, “it was sold to James Hooper who added two stores to the front, and the hall above. Libbey and Beal occupied one of the stores as a cabinet makers shop, and James Hooper had a grocery store there for a time, and later Miss Lydia Gilman had one and Miss Cobbey the other for their millinery wares. Mr. Huntress returned and buying back the property carried on his former business in the upper hall.”

At the time of the photo below, probably just before 1900, the building was known as the Ross Block. 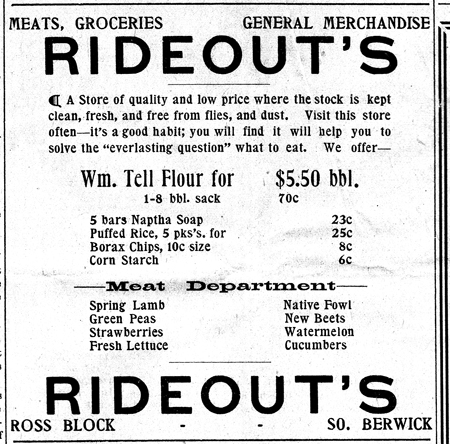 This advertisement in the South Berwick-Salmon Falls Independent, July 9, 1914, shows the building contained a Rideout's grocery store. Ruel B. Rideout lived on Portland Street, and also owned a hardware store at Butler Street that later moved to the Business Block.

(This article was written by Wendy Pirsig, revised in November 2020.)