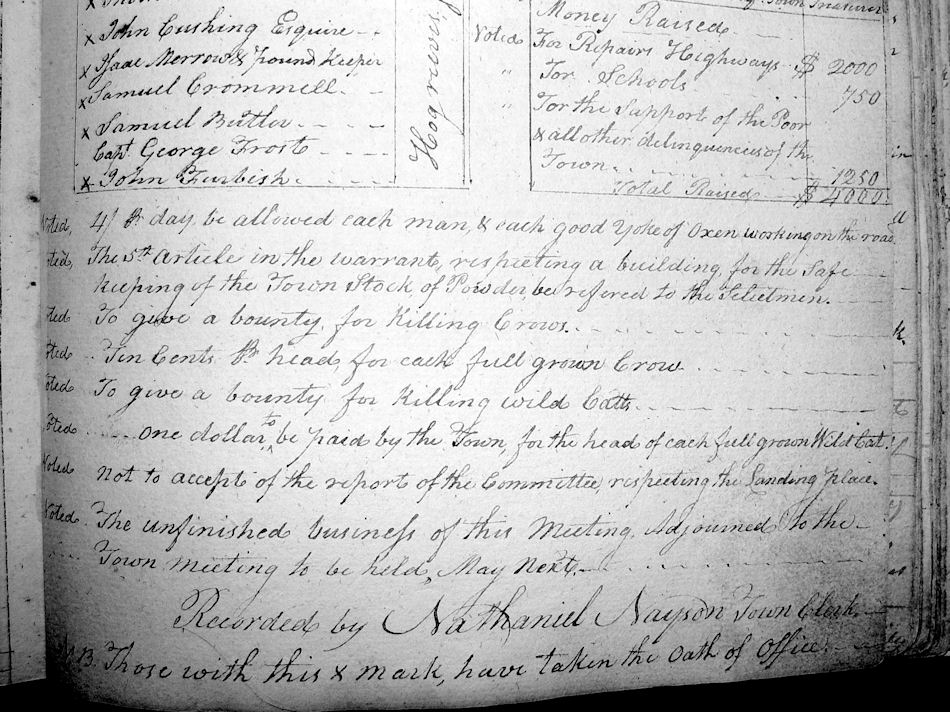 Records of the Berwick, Maine, town meeting on April 3, 1809 (before South Berwick, Berwick and North Berwick were separate towns) called for the construction of a powder house.  It seems likely this building gave its name to Powder House Hill, also known as Butler's Hill.

Voted, 4/_per?_ day be allowed each man & each good yoke of Oxen working on the road
Voted, The 5th Article in the warrant, respecting a building for the Safe keeping of the Town Stock of Powder, be referred to the Selectmen
Voted to give a bounty for Killing Crows
Voted Ten cents _per?_ head for each full grown Crow
Voted to give a bounty for killing wild Catts
Voted Š one dollar to be paid by the Town, for the head of each full grown Wild Cat

The town that year also allotted $4000 in taxes, half of which would be spent maintaining roads throughout the present areas of South Berwick, Berwick and North Berwick.  The rest of the budget appropriated $750  for schools and $1250 "for the support of the poor" and all other town business.

The exact location of the powder house is not known.  Before the War of 1812, local men would participate in militia drills twice a year in what is now South Berwick Village, then open countryside known as "the Plains."  The new United States government depended on local militias to defend the country.  The most likely area for Berwick musters would seem to be the present location of the Cummings Mill on Norton Street, South Berwick.

The militia often assembled at the Plains Meeting House a Baptist church and town meeting hall that stood on the site of today's Soldier's Monument .  A description of a South Berwick militia call-up there in 1829 was published in 1908 in Old Eliot , Book Three, Vol. VIII, p. 195:

Pursuant to a Brigade order of September 21st, A.D. 1829, Capt. Samuel F. Staples will parade the company under his command on the plain near The Revd. Mr. Boyd's Meeting house in South Berwick, on Wednesday the fourteenth day of October next, at Seven o'clock in the forenoon, armed and equipped as the law directs for military duty, review and inspection: and there await the orders of the Adjutant of Said Regiment. Capt. Staples will make written application as by law directed to the Select Men of the town wherein his Company belongs for the rations to which they are entitled. The Regiment will be ready for the reviewing officer at nine o'clock in the forenoon.

-- By order of the Colonel, Isaac P. Yeaton, Adjutant