An area that should attract researchers and yet frustrated this researcher was a place called Porter Pines and the term “Radio Ranch.” They were located on the same land and the latter may have replaced the former as a place to recreate.

The site was near the South Berwick town line bordering Eliot along the Salmon Falls River at the point of Shorey Brook.  Boats as well as the electric trolley could have accessed the area during the time of its recreational use.

Joe Frost reports that the electric lines had great economic hopes for both Porter Pines and Quampheghan Park. Neither reached its potential for many reasons, especially because of the change in technology, the advent of the automobile and the subsequent decline of the electric trolleys.

Pictures and post cards suggest that Porter Pines was quite a complex for its day. There was a main lodge, dining hall, a dam holding back a man-made pond, and a seasonal “tent city” -- all ideally situated on tidal water with access to the cultured hustle and bustle of the rest of the world.

In interviewing many, I found most did not know much in the way of detail as to its purpose in the early phases. Most agreed it was a retreat center of sorts and thus explaining the tents.

Of interest, Darby Davis, age 98 and living in Eliot, is former selectman of South Berwick in the 30's. He claims Porter Pines was a Jewish retreat center catering to out-of-staters looking for serenity. He also offered this story: A delivery friend of his reported that it at times might have been a nudist colony. Seems that while making a delivery he was greeted in such a way as to draw that conclusion. Darby saw Porter Pines as a place to rejuvenate the body and soul as well as the mind. The area geographically certainly afforded lots of privacy and probably catered to those from “away” as opposed to the locals, thus the absence of details in people's recollection.

One aspect of the area survived the decline of the trolley lines. The dance hall and country western venue called “Radio Ranch” attracted many entertainers and patrons. Ralph Holmes told me that his father remembers Gene Autrey entertained there. Carol Zamarchi tells of hearing that country western shows would come and go to the delight of many.

Good times and rough times followed, as remembered by those attending the dance hall. Most I interviewed remembered the rough crowds at the dances where fights, alcohol, and promiscuity were the attraction. Seems the authorities were called upon to restore order late in the evening much to the concern of neighbors in the early 40's. According to Mrs. Savage, the present owner, she and her husband were threatened to be run out of town if they continued with the dance hall when they bought the place in 1945. The Savages had no desire to continue with this economic enterprise, and another chapter of recreational entertainment in South Berwick came to an end.

Of note: According to Ralph Holmes, a public beach existed across from where the South Berwick boat launch is now located. The locals used it.

In the same vein as Porter Pines was the “Lake View Farm” for summer boarding, operated by E. H. Knight. It was located on Knight's Pond Road overlooking the South Berwick Junction train station.

Quamphegan Park was an amusement and recreational park located in the area of what is now Waterside Lane not far from the Route101 bridge on the Salmon Falls River in South Berwick. It was operated by the electric railway company to encourage leisure time trolley riders at the turn of the century.

In addition to tourists and nearby patrons, several local churches held their annual picnics at Quamphegan Park. The park covered about four acres surrounded by huge beautiful pine trees. 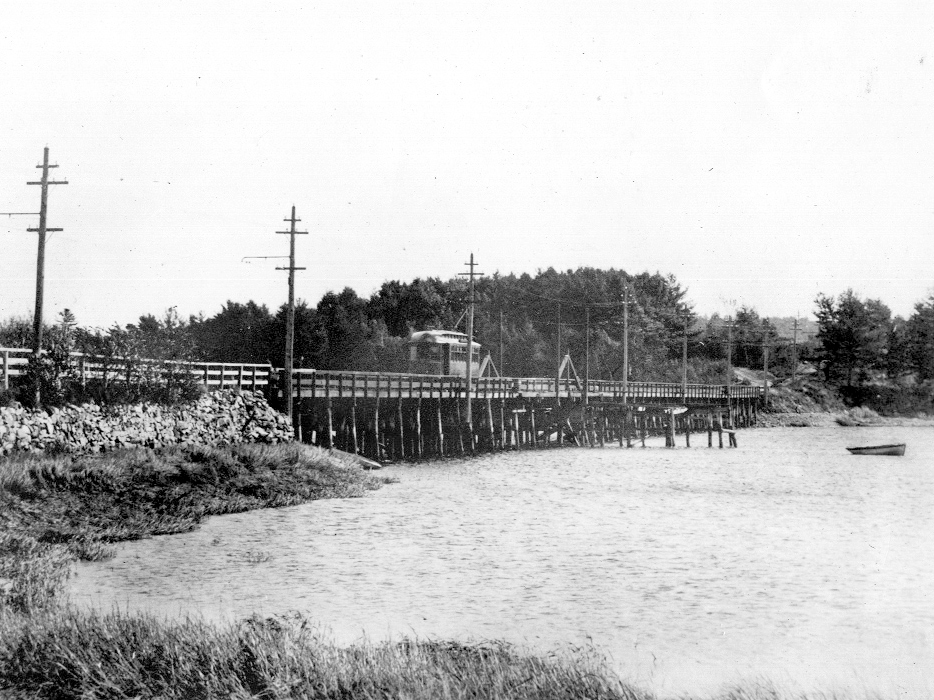 Over time, there was a Ferris wheel, merry-go-round, a dance hall, a penny arcade, a restaurant, a bandstand, and a small pond. Of note: The merry-go-round was powered by a steam engine that was built by Mark A. Libbey of South Berwick. We will meet Mr. Libbey later in my talk.

A Mr. Swasey operated the park for the trolley company. He built a cottage there where his family used to stay each summer. His daughter, now Mrs. Cora Currier, always looked forward to being at the cottage during the summer vacation months. Her brothers sold popcorn during the entertaining bandstand concerts. Mr. Swasey's wife, Cora's mother, cooked at the restaurant where hot dogs and hamburgers were sold. Every Sunday, Mrs. Swasey would make a fish chowder complete with pickles and crackers. Price was 25 cents.

When Cora Currier turned 14 in 1920, Quamphegan Park was declining, as ridership on the electric trolleys gave way to America's love affair with the automobile. A new era in transportation was to have a huge impact in attitudes and practices on American recreation.