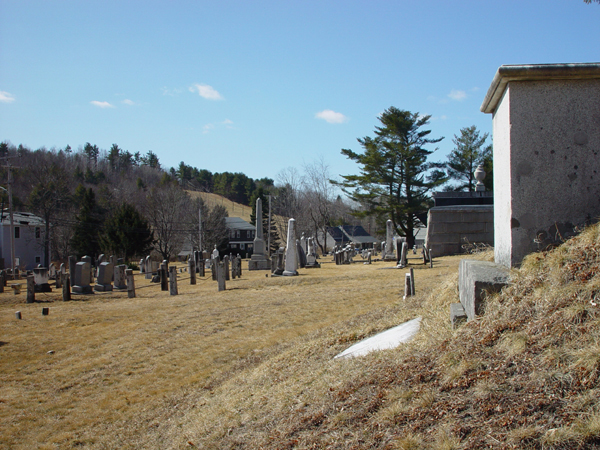 Currier's tomb, right foreground, at Portland Street Cemetery on Agamenticus Road, with Powderhouse Hill in the distance at left

In March, 1817, a merchant named Micajah Currier, writing his will, provided funds for the creation of a new burying ground “for the inhabitants of Berwick and South Berwick,” according toYork County, Maine Will Abstracts. Currier's tomb was the first to be placed there, in 1818. This was how Portland Street Cemetery began. In those days Agamenticus Road would have been a country lane without a name. Nearby, however, was the Meeting House of the Plain, on a spot that became the Soldiers' Monument at the Portland Street intersection. Built as a Baptist church, it also served for town meetings in the 1800s.

At least 45 Civil War veterans are buried here, as well as veterans of the Revolutionary War, the War of 1812, and the two world wars. 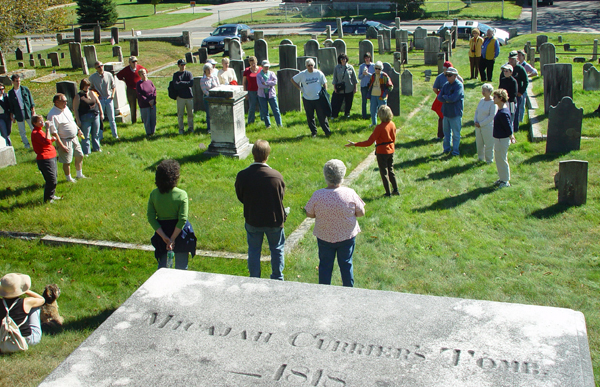 Among the many historic graves in Portland Street cemetery, that of author Sarah Orne Jewett (1849-1909) is the most famous today. Her lilac-surrounded grave lies near that of her father, Dr. Theodore H. Jewett, her sisters, and other family members.

A marker in Portland Street Cemetery memorializes Sarah Orne Jewett's uncle, Capt. Samuel W. Jewett (1823-1846), who was lost at sea in the Jewett family ship Berwick, east of Cape of Good Hope, enroute to the East Indies. The ship had been built in South Berwick at Pipe Stave Landing near the Hamilton House.

Other South Berwick residents buried in the Portland Street Cemetery include:

John and Olive Wallingford Cushing lived in a mansion that was on the site of Central School. A native of Massachusetts, John had been a colonel in the 2nd Plymouth County regiment. During the Revolutionary War they had lived in Boston throughout the British siege of the city. In 1825, after John Cushing's death, Madame Cushing received General Lafayette when he visited South Berwick. The Cushings' son-in-law, H. H. Hobbs (1802-1884), was a prominent judge, school committee member and Berwick Academy trustee. He served as defense attorney in South Berwick's 1854 murder case against William B. Smith.

Street. He was one of the earliest Berwick Academy graduates, an 1814 Bowdoin graduate, and a law partner of Judge William Allen Hayes. Their office was upstairs over the Parks Store. 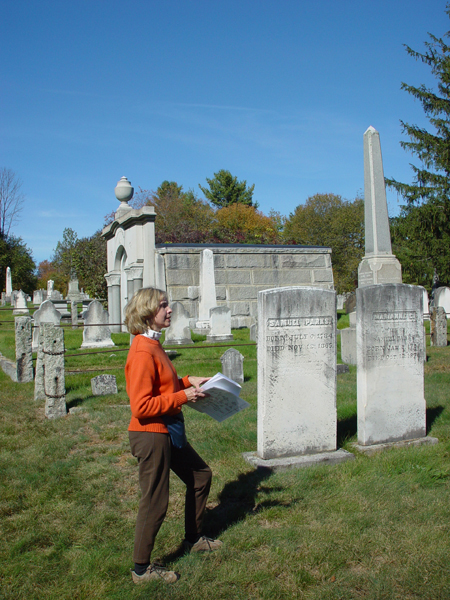 Samuel Parks (1784-1865) ran the Parks Store on Main Street for many years along with his family. The store's next owner, Alonzo Stackpole (1830-1880), is also buried here.  The store later contained Flynn's News and other small local businesses.

Abner Oakes -- Attorney and judge who lived on Academy Street, his office was on Main Street in a little building later moved to Norton Street. Oakes presided over a murder case in 1854, and later helped rebuild the town after the 1870 fire. 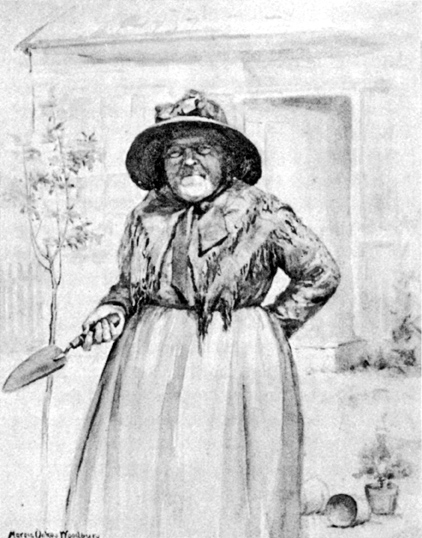 Marcia Oakes Woodbury – Abner Oakes' daughter became an artist, traveled to Europe, and illustrated Jewett's Deephaven in 1893. She and her husband, the famous marine painter Charles Woodbury, had studios in Ogunquit and founded the art colony there in the late 1800s 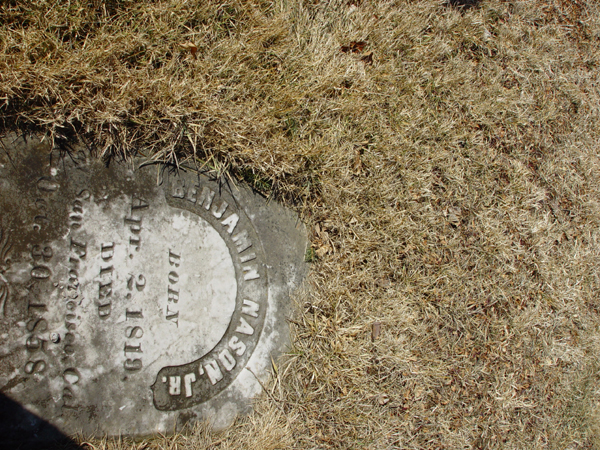 Two sons of Benjamin Nason died as young men. Augustus Nason, a Civil War soldier, was killed in the Battle of the Wilderness, near Spottsylvania Courthouse, Virginia, 1864. Benjamin Nason, Jr. died in San Francisco in 1858.

Dr. Caleb Sanborn (1814-1871) was a physician who practiced all over town for decades. His son, Madison C. Sanborn (1844-1872 or 1873), was a Civil War soldier who fought at Gettysburg under Col. Joshua Chamberlain. (He also spelled his name Mattson.)  Sanborn attended Berwick Academy from 1855 to 1860, graduated in 1860, then briefly attended Brown University.  At age 18, on May 22, 1861 he enlisted in Portsmouth, N. H. in Company A, 2nd New Hampshire Volunteer Regiment.  Sanborn mustered in on May 31, 1861. He was discharged disabled on August 1, 1861 in Washington D.C. (Source: A History of the Second Regiment, New Hampshire Volunteer Infantry by Martin A. Hayes published in 1896, re-published in 1996.)  Sanborn then mustered in August 29, 1862 as a 2nd Lieutenant in Company A, 20th Maine Regiment.  He was promoted to 1st Lieutenant on June 28, 1864. Mustered out on June 4, 1865. (Source: Maine at Gettysburg, published in 1898, re-published in 1994.) After the war, Sanborn remained in the Army and posted to Ft. Fred Steele, near Rawlins, Wyoming, during hostilities with the Oglala Sioux. He died of apoplexy (stroke) while on detached duty in Helena, Montana Territory, on January 12, 1873 at the age of 29. He was buried in the Fort Shaw, Montana Territory Cemetery, Section 12, Plot 2, and later re-interred in the Custer National Cemetery, Little Big Horn Battlefield National Monument, Montana (Section A, Grave Number 743) on March 6, 1905.  A marker was placed here at Portland Street Cemetery in his memory.

Congressman from Maine's First Congressional District. John went away to sea as a boy and returned with profits to buy the Great Works woolen mill on Brattle Street, which he built up as the Newichawannock Mills. He built a mansion next to Berwick Academy. He died coming home from Salmon Falls Village, when his horse spooked and ran his carriage off the bridge.

Isaac P. Yeaton, d. 1886 -- Owner of the Leigh's Mill house on Vine Street, he operated grist and saw mills at the throughout the 1800s and ran a grain store in the village of South Berwick.

John C. Mason d. 1878, machinist aboard the US flagship Hartford, in Montevideo, Uruguay, at age 27.

Sen. John B. Nealley (1810-1886) Lawyer and one of the founders of the Odd Fellows fraternal organization.

Andrew Nealley (1815-1887) Merchant who operated a general store near the Portsmouth Manufacturing Co. at Quamphegan Landing.

Eben Nealley (1807-1888) Tavern keeper of the Quamphegan Hotel on Main and Parks Street, near the Landing. 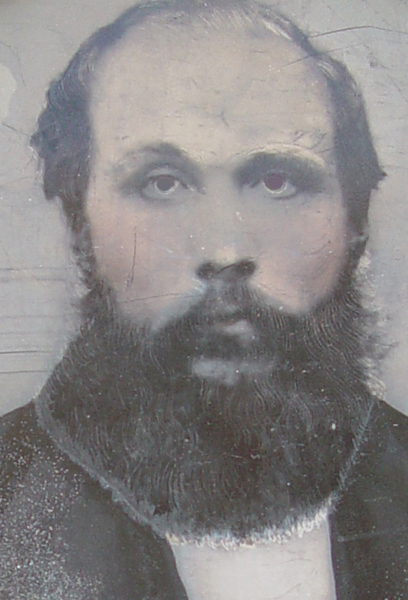 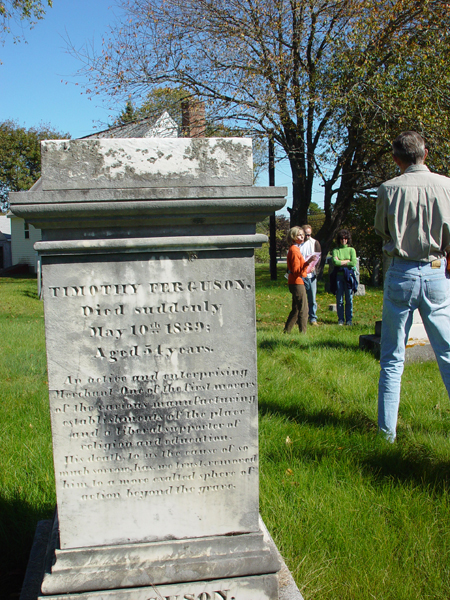 Timothy Ferguson (c. 1788-1839) Shipping merchant and partner of Theodore F. and Thomas Jewett, as well as in the firm of Ferguson & Leigh. He was one of the founders of the Portsmouth Company cotton mill at Quamphegan Landing in South Berwick in 1830 and died within the decade at age 51. "Died suddenly," his monument reads, "an active and enterprising merchant one of the first movers of the various manufacturing establishments of the place and a liberal supporter of religion and education.  His death to us the cause of so much sorrow has we trust removed him to a more exaulted sphere of action beyond the grave." 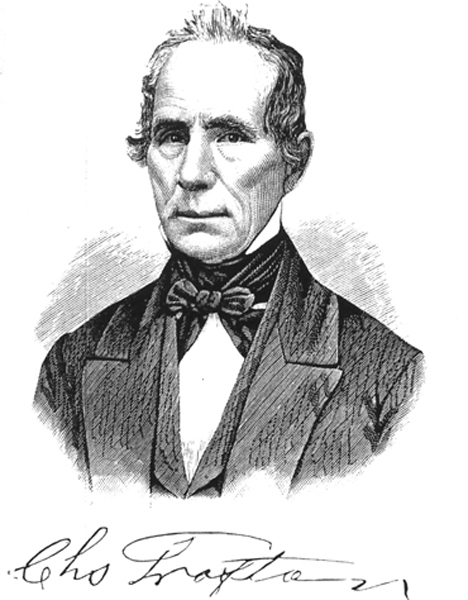 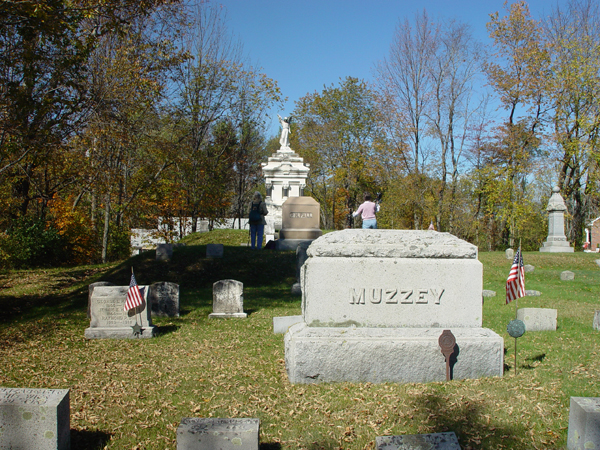 The town report of 1898 records a gift to the town of funds for “fencing” and a driveway at the cemetery, provided in the will of Hon. Albert Goodwin of Lynn, MA, originally from Berwick.  This bequest may have led to the construction of the granite retaining wall that borders Agamenticus Road today.

In the 1930s the Works Projects Administration (WPA) mapped the cemetery and noted graves of veterans.  This map, held at the Maine Archives and posted online by the Digital Public Library of America, shows that the WPA counted one grave of a veteran of the Revolutionary War, one from the War of 1812, 45 from the Civil War, and one from World War I. The number of veterans buried here since then is unknown.

(Summary by Wendy Pirsig from archives at the Counting House Museum. The Old Berwick Historical Society is grateful to Arthur Stansfield for information about Mattson Sanborn. This page updated December 2020.)