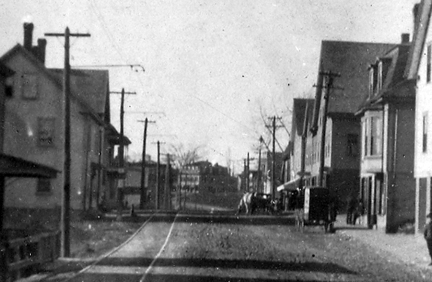 The property adjoins Salmon Falls Brook and its former mill pond.  A road once led to the mill area near the brook’s mouth on the rivr. The house, which was once a duplex, does not seem to appear on a map of 1901 but is on the map of 1927. The addition dates to 1937.  According to family accounts, Albert Roberge, Sr. moved into this house after opening a candy store across the street, later 430 Main, about 1918.  His uncle Joseph had operated a bakery there since 1900. The family later operated the Roberge Bakery next door at 431 Main.  In 1920 Albert married Emily Gilliland, whose father drove a carriage for the Vaughans at their estate (now Hamilton House), and made many of the trails now in Vaughan Woods State Park.  In the historic photograph, the Roberge House is the light-colored house, at far left.