This house is part of the South Berwick Village District on the National Register of Historic Places.

Thomas Jewett (1790-1864) was author Sarah Orne Jewett’s great uncle. He was brother and business partner of Capt. Theodore F. Jewett, helping to lead their successful shipbuilding and commercial enterprises at Pipe Stave Landing on the river near the Hamilton House, as well as the Jewett Store at the Corner.

Thomas' wife was Betsey Lord Jewett, a sea captain’s daughter from Rollinsford, NH. The Jewetts raised seven children here. In 1860, when Thomas Jewett was the last remaining Jewett brother in his generation, he was said to be the wealthiest man in South Berwick. After his death, the house became the home of his nephew and son-in-law, Elisha Jewett. The Grant House apartments were later located at this property.

Thomas Dearborn Jewett was born on May 8, 1790 in Rochester, New Hampshire, and seems to have come to South Berwick about 1815 with his father, Dearborn, and two brothers, Benjamin (b. 1792) and Theodore F. (b. 1787). This older brother Theodore was Sarah Orne Jewett’s grandfather, the sea captain who around 1820 moved his family into the Haggens house at the Corner that we today know as the Sarah Orne Jewett House. Thomas Jewett may have built his house about the same time.

Thomas's wife, Elizabeth (Betsey) Lord, was born in Rollinsford (formerly Somersworth), NH, in 1791. She seems to have been the daughter of Capt. Nathan Lord (1758-1807), a partner of merchant Jonathan Hamilton. Lord and Hamilton made fortunes in the late 1700s trading in the West Indies with plantations making sugar products using slave labor.

The Jewett shipyard was next to the Hamilton House at Pipe Stave Landing on the Salmon Falls River.  Below, a view of this area today

Jewett shipbuilding.  Three examples of ships the Jewett brothers built at Pipe Stave Landing illustrate the scope and character of their maritime commerce upon their arrival in South Berwick in the generation after Hamilton:

The Jewett Store. Though Thomas Jewett seems never to have gone away to sea, he was immersed in the business of trading, as well as investing in property in the South Berwick area. The brothers operated a West Indies trade goods store at 10 Portland Street, as shown on a map of 1835. The business was still at that location in 1860.

Years later, Mary Jewett, Sarah Orne Jewett’s sister, described the inventories handled by her grandfather and great uncle as she recalled the girls' childhood in the mid-1800s:

“We read interesting lists of brocades, satins, velvets, silver, china, and glass which was sent for from England before the Revolution by the rich and great, and wonder just what was meant by the strange names of materials oftentimes, but while we should probably find few actual luxuries in the stock of the general store of 1800 or thereabouts we should find a great variety surely both in quantity and arrangement from great bins of coarse salt, corn, salt fish, down to pins sold by the ounce in bulk, and in bulk it literally was with the queer round heads twisted on. Along with the pins went skein, cotton, wooden combs, queer gauze ribbons, laces, tapes, queer collage bonnets and so forth. Who nowadays would know what Rouen cassimere was, or calimanco, or paduasoy, and yet all these and many other like materials were of common use a hundred years ago, and perhaps later. Broad cloths and other materials for mens clothing, satins for vests, gast silk and lawn handkerchief for men's neckties, great bell crowned beaver hats, strange shaped shoes, high shell combs were in every well-provided stock, along with writing paper, wafers, sealing wax, quill pens and blotting sand, beside medicines, hardware, and a few books.” 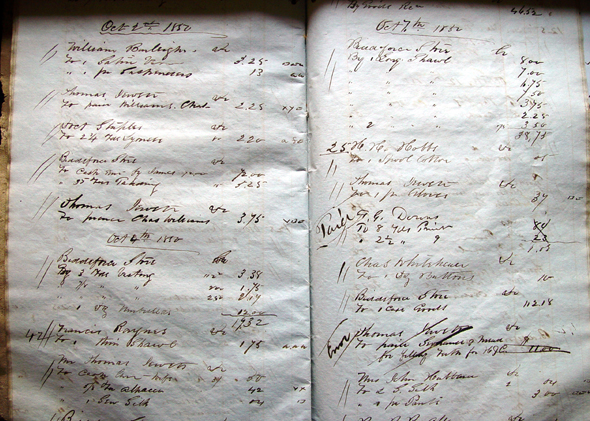 This youngest son was named for the family’s 34-year-old neighbor, attorney Charles N. Cogswell. During the Civil War, Charles C. Jewett served as a surgeon with the 15th Massachusetts Infantry, according to History of York County, 1880. He was a physician still living when that history was published.

Mary Elizabeth married attorney and businessman John B. Nealley. After the death of attorney Charles N. Cogswell, they lived in his house, which still stands at 169 Main Street.

“Sally” Orne Jewett married her cousin, Elisha Jewett, the son of Benjamin Jewett. They lived across the street at 176 Portland Street. She died a few months after her father, in complications from childbirth.

Thomas Jewett died in 1864 at age 74, the last of the trio of Jewett brothers. After his wife Betsey died in 1867, Elisha Jewett seems to have inherited the Thomas Jewett homestead where his wife had grown up. In 1866 he married Charlotte T. Cross of Portsmouth, NH.

In 1890 the street next to the house was named Jewett Street, according to he South Berwick town report of 1891. It was later changed to Jewett Avenue.