Salmon Falls Brook, also called Driscoll's Brook, runs through the Point, and a little stone bridge probably built by the Great Falls and Conway Branch Railroad in 1853 can still be seen below street level.  Looking downstream from Main Street, a wooded area visible was once a mill pond used by the McIntire shingle mill in the 1800s.  On the map of 1872, the railroad tracks appear, and the Bently & Stiles Soap Factory is also nearby.  Remains of the dam and the railroad foundations could still be seen on a walk through the woods more than a century and a half later. 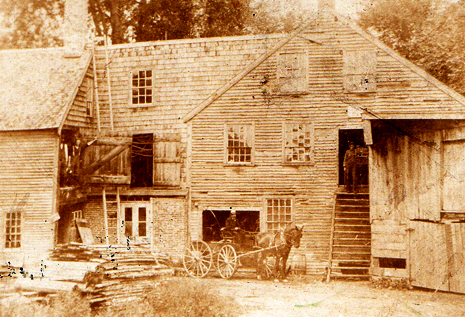 The McIntire (McIntyre) mill manufactured shingles, sashes and blinds, and even coffins, and sold products for many years at a retail store in the brick business block in town.  The McIntire-McCooey Funeral Home later located at 301 Main Street is believed to be a descendant of this old family hardware and wood supply business.