This house is part of the South Berwick Village District on the National Register of Historic Places. Israel W. Goodwin was a tanner living here in the mid-1800s with his wife, Sarah Joy Goodwin.  The Boston and Maine Railroad ran next to this property. Tanneries were also associated with the nearby Lambert (Ferguson) House on Portland Street and the Hodsdon House on

Israel W. Goodwin was born on August 8, 1823, and in 1845 he married Sarah Joy. Old Berwick Historical Society archives include an 1857 deed showing the sale in Berwick of an engine house and steam engine belonging to Goodwin, and about the same time, his tannery was bought by Joseph Goye, a tanner, and neighbor Robert Hodsdon, whose house is at 31 Agamenticus Road. It is thus believed that Israel W. Goodwin may have died about the time the map shown here was drawn about 1856. His son, Benjamin, married in Tamworth, NH in 1869. By 1872 (Atlas of York County) the house was owned by E. H. Flagg.

It’s not known who built the house, but a property nearby was called a "yoking place" in 1789. Portland Street in the late 1700s was a route through which ox teams brought mast pines out of Berwick and Lebanon, and took them to Salmon Falls River landings such as Quamphegan. Israel W. Goodwin’s great grandfather seems to have been Benjamin Goodwin (1722-1786), perhaps Benjamin II, a "master carter" engaged in the mast trade. Master carter is a term used for one who cut and hauled log masts. Born somewhere in South Berwick, this Benjamin Goodwin eventually moved to Kennebunk.

The Joshua Goodwin Farm, 1883.  Pictured are Joshua G. and Sarah Nichols Goodwin and their sons, David N. Goodwin and Benjamin Goodwin, and their families. Photo courtesy of Chuck Oliver.

Across Portland Street from Israel W. Goodwin’s house was the newer farm of his older brother by 13 years, Joshua Gilpatrick Goodwin (1805-1897), who was married to Sarah Nichols (1800-1886). She was the granddaughter of David Nichols (1734-1775), a Quaker blacksmith and merchant trader of the mid-1700s who had property along Portland Street.
David Nichols owned a large house on Portland Street closer to the present intersection of Agamenticus Road. There is evidence that he may have also built the Joshua Goodwin farm or some early portion of the structure.  Local historian Margaret Foote wrote in the early twentieth century that "the Goodwin House on the hill" was built by "one of two brothers named Nichols," perhaps referring to David's sons David (1762-1821) and Samuel (1768-1823).  Samuel was Sarah Nichols' first husband, and she married Joshua Goodwin after his death.
Joshua and Sarah Goodwin passed the farm to their sons, David Nichols Goodwin (1829-1885/1888) and Benjamin Goodwin. The latter’s name appears on the farm on the map of 1872.
Behind the house and slightly to the left stood one of the farm's two barns.  In the above photo, the rock wall and wooden fence rail in the foreground led to the other barn, out of sight to the left.  The drive to the south (left) side of the house is clearly in evidence.  A section of fencing at the right indicates that a later drive to the north had not yet been built at the time of this photo.

Joshua's great great-grandson, Chuck Oliver, who lived on Portland Street in the 1930s, writes: "The house looks exactly as I remember it as do the south drive and the entrance to the lower barn.  The upper barn was no longer there by the time I came along, but I do recall hearing, as a boy, that in years past some barn was moved to a new location."

The Joshua Goodwin Farm, 207 Portland Street, stood on what was known as Goodwin Hill. It supplied dairy products to residents of South Berwick Village into the early 20th century.

Goodwin Hill, viewed from Butler (Powderhouse) Hill, is in the distance in this photo at right from the turn of the last century. The Joshua Goodwin Farm is in the upper right hand corner. The Israel W. Goodwin House, owned by Joshua's brother, is out of view at right.  The intersection of Portland Street and Agamenticus Road, where the soldiers' monument was erected by the town about 1898, is at the center of the photo. 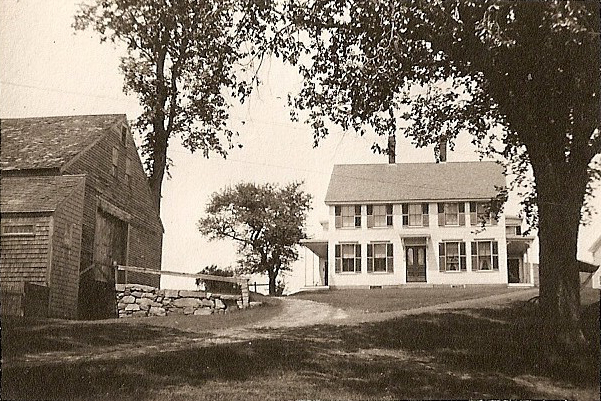 The Joshua Goodwin farmhouse was a duplex in later years, and the Goodwins occupied the half to the left.  The kitchen was at the back of the house and opened through a door into a long front room divided by a sliding door (normally closed).  The front half, the parlor, was usually reserved for company, the rear half being the sitting room.  The barn in the photo at left was destroyed in a snow storm at Easter, 1932, a few years after this photo was taken.

Chuck Oliver writes of the above photo that between the large tree and the porch on the north (right) side of the house, a bit of shingled wall may be part of the old upper barn.  Chuck has a personal recollection of the tree behind the barn at left, "a tall elm tree most of whose trunk is hidden behind the barn, a tree quite clear in my memory for a number of reasons.  A large gash extended most of the vertical length of its far side (that facing the house), the result of a lightning strike.  Also, Uncle Ed allowed me to use his old BB gun with which I would sit on the porch steps and fire away at that tree, aiming in particular at the gash.

"The other tree between the house and the barn does not appear to have changed very much in the interval between the taking of the two photographs and indicating, perhaps, that the difference in time was not great...

"The lower barn looks exactly as I remember it, but one feature I had forgotten until I spotted it here.  The structure at the near corner was a two (maybe three) hole outhouse, the long multi-pane window being located above the bench.  Entrance was by a separate small door in the far side where it extended beyond the front face of the barn."

Of his great Uncle Ed, Chuck also recalls that he was a lifelong South Berwick resident "and for many years a clerk at Rideout's Hardware store as well as a deacon in the First Baptist Church.  I remember him not only from early 1920s visits prior to our move to South Berwick but more vividly from 1927 (when we moved there) until his death in 1956.  After the loss of his wife in 1939 he finally left 207 Portland St and spent his final years as a member of our family at 105 Portland St."