This National Historic Landmark owned by Historic New England is regularly open to the public. It was the home of Sarah Orne Jewett (1849-1909), author of The Country of the Pointed Firs, Deephaven, and other novels and stories about Maine.

Even when the house is closed the public may visit the grounds.  A visitor center is next door at Jewett-Eastman House, where Jewett lived with her family from 1854-1887. 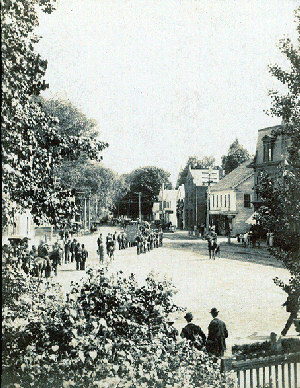 Writer Sarah Orne Jewett was born in this house and spent her babyhood, lived next door at the Jewett-Eastman House for 33 years, and then returned here with her sister Mary for the last 22 years of her life. She died in 1909 and Mary in 1930. Today the Sarah Orne Jewett House is owned by Historic New England (formerly SPNEA) and is open for tours.

Historic New England writes, "Today, Sarah’s beloved home is Sarah Orne Jewett House Museum. It reflects not only the sisters’ eclectic tastes and their desire to preserve family’s tradition, marrying Georgian architecture with Aesthetic Style; the house also reflects the life, work, and passion of Sarah, who created a life of artistic and literal freedom for herself in Victorian America."

Jewett’s grandfather, Captain Theodore F. Jewett, had lived in this stately Georgian residence since the 1820s. In his generation there had been three brothers, Capt. Jewett, Thomas Jewett, and Benjamin Jewett. Born in Rochester, New Hampshire, in the late 1700s, they and their father, Dearborn, all gravitated to South Berwick and its shipping trade. For decades before the Civil War, brothers Theodore and Thomas built ships at Pipe Stave Landing near the Hamilton House and invested in shipping, becoming the wealthiest citizens of South Berwick. The house of Thomas Jewett is at 151 Portland Street today.

One example of Capt. Jewett’s commercial pursuit was the ship Olive & Eliza that he and his partner Timothy Ferguson built in 1825 at Pipe Stave Landing. William Hanscom was the builder. The ship was 386 tons, with a length of 111.7 feet. Capt. Jewett, then 38 years old with small children at home including Sarah Orne Jewett’s father, sailed as master on the Olive & Eliza’s first voyage, round the triangle trade route around the Atlantic including Liverpool. With other captains, the Olive & Eliza sailed the globe, even to the Far East, for the next 21 years, and had many adventures, including being struck by lightning with a load of cotton and being set on fire. The ship ended aground in 1846 in Dry Tortugas, with a cargo of barrel staves.

By 1846 one of Capt. Jewett’s sons, Samuel W. Jewett, had become a captain, and sailed as master of the Jewett ship Berwick, only to be lost at sea in a collision off Cape of Good Hope.

In conjunction with their maritime commerce, the Jewetts operated a trade goods store at different locations across the street from the Jewett House, including, eventually, the Odd Fellows building across Portland Street.

The layout of Capt. Jewett's property in these early days can be seen on a map of South Berwick Village from about 1835. The original map today is in the Jewett archives at Harvard University.

But the history of this interesting house goes back even earlier, to the century before the Jewetts arrived.

Born in 1742, John Haggens is believed to have built the Jewett House about 1774, at the location that came to be known as “The Corner,” where the easiest route to Berwick met the road to North Berwick. As shown on this excerpt from a map of 1805, today’s Portland Street branched off from Main Street even then.

Originally the house looked a bit simpler than it does today, and perhaps was gray. The third-floor dormers and white paint we see were added late in Sarah Orne Jewett’s life, probably about 1900.

John Haggens lived in the house with his wife, the daughter of Judge Benjamin Chadbourne, and their large family, until his death in 1822. John’s father, Tilly Haggens, had come from Ireland and in the mid-1700s acquired much of present-day Main Street and South Berwick Village, including presumably some mill rights on the Salmon Falls River. Both father and son have been described as traders and entrepreneurs. Tilly's locally-built 80-ton sloop, The Dolphin, regularly sailed between Portsmouth, NH, and Barbados in the 1760s, trading cargoes of local wood products for rum, sugar and cotton produced by slave labor, with proceeds likely helping to finance construction of the house. In the 1798 Direct Tax Census, John Haggens is listed as one of the two wealthiest men in the town.

It seems John Haggens or someone else in the family capitalized on a location at The Corner by meeting the needs of highway travelers who came this way on the stagecoaches carrying the mail. In 1795, 1807 and 1809, almanacs also list as a local stop the name Haggens or Higgins, both common spellings for the family. The location of the tavern is not known.

In Sarah Orne Jewett’s lifetime, she used to try to imagine the days of the Haggens family a century before. Writing her novel The Tory Lover in 1901, Jewett could sit in her house and picture the world of the late 1700s as she worked the house into the story:

“The Haggens house, with its square chimneys, and a broad middle-aged look of comfort, like those who were sheltered under its roof, stood facing the whole southern country just where the two roads joined from the upper settlements. A double stream of travel and traffic flowed steadily by this well-known corner, toward the upper and lower landings of the tide river. From the huge square stone that floored a pointed porch of severely classic design could be seen a fine sweep of land from the Butler's Hill on the left, over the high oak woods of a second height to the deep pasture valleys. Major Hight's new house and huge sentinel pines stood on a ridge beyond, with the river itself showing a gleam of silver here and there all along the low lands toward Portsmouth. Across the country westward was the top of Garrison Hill at Dover; to the south was the dark pine-forested region of the Rocky Hills.”

Tilly Haggens is remembered for planting elm trees along the roads that became downtown South Berwick before he died in 1777. The house in Jewett’s day was shaded by towering Haggens elms. They grew until struck down by disease in the 1960s.

The map below is an excerpt from the South Berwick village map in the York County Atlas of 1872, when the Jewett/Haggens House was occupied by Jewett's uncle William Jewett, and the author lived next door with her parents in the house marked here "Dr. T. H. Jewett."