This house is part of the South Berwick Village District on the National Register of Historic Places. In the early 20th century, it was the home of George H. Yeaton (1852-1942). He was a Rollinsford, NH, native but also attended Berwick Academy. He became a breeder of Ayreshire cattle on a beautiful farm off Route 4 in Rollinsford near the Hiram Roberts Grange, which he helped found.

The following is a list of some of the activities of George H. Yeaton during his long life in this vicinity. 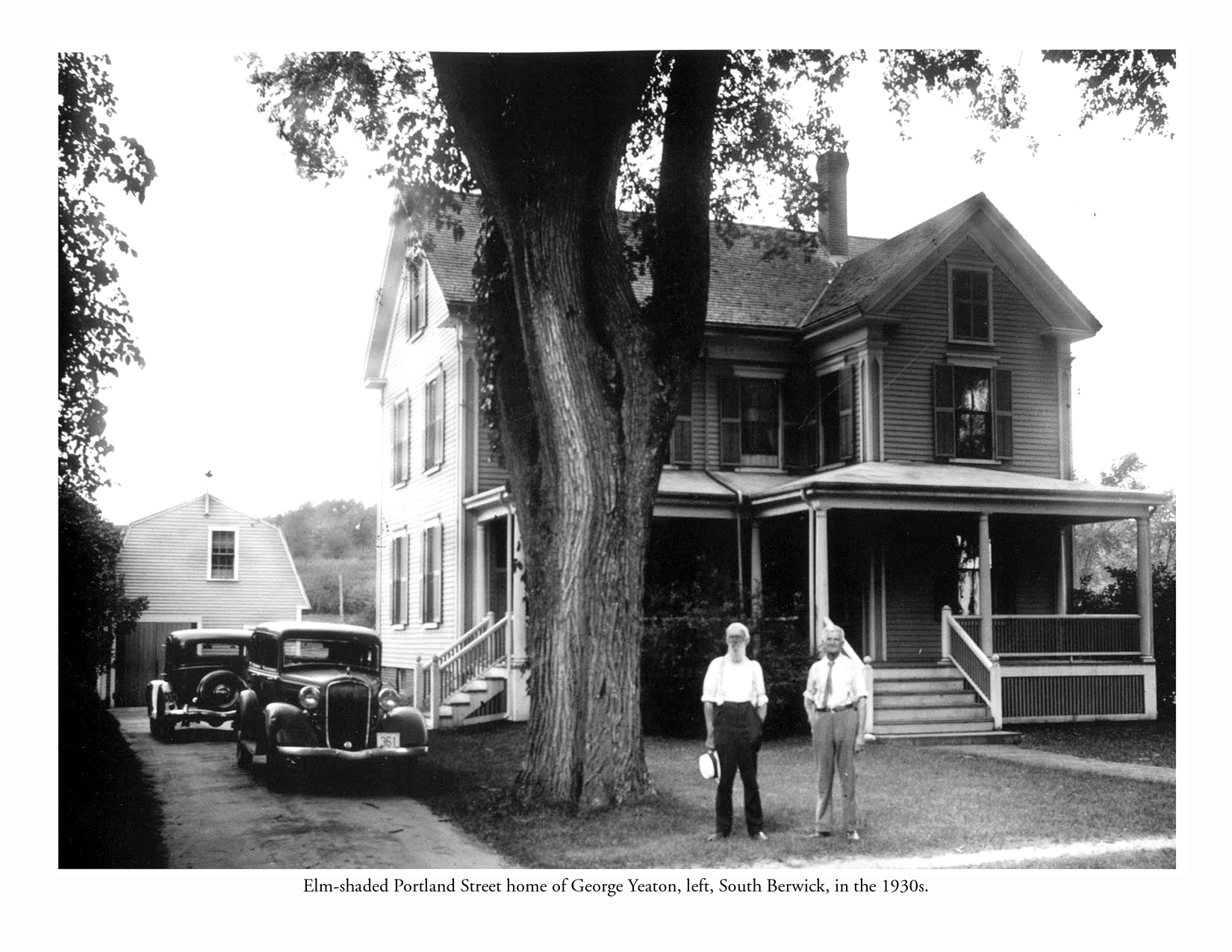 He attended the public schools in the Town of Rollinsford, the old Franklin Academy in Dover, and the Berwick Academy in South Berwick, playing in the first baseball nine here known as the “Minnies”.

He began teaching school at the age of eighteen years and continued in that employment for five terms when he started in the retail milk business. He was a breeder of Pure Ayreshire Cattle and at one time crossed the Atlantic to Scotland and imported a herd of that breed. He held three public auctions at his farm closing out all his herd consisting of seventy-one head that were distributed all over New England.

At the age of twenty-three years he was elected a selectman of the Town of Rollinsford and served for two years.

He was twice elected to represent his town in the State Legislature; served as County Commissioner four years and a member of the New Hampshire State Senate two years and while there was the chairman of the very important “Committee of Agriculture”. He was elected and served as President of the General Committee known as the “Farmer's Club” which was composed of the farmers who were members of either the House or Senate.

He was the Charter Master of Hiram R. Roberts Grange and subsequently re-elected three times to the office; master of Eastern New Hampshire Pomona Grange; a member of the Executive Committee of the New Hampshire ….


Article by the Ayreshire Breeders' Association

A BREEDER OF AYRESHIRES.
A Sketch of George H. Yeaton,
President of the
Ayreshire Breeders' Association
A. J. Hamm, New Hampshire

George H. Yeaton, who has been called to the presidency of the Ayreshire Breeders' Association, is the well-known owner and manager of Hickory Hill Farm, of Rollinsford, N. H., post office, Dover, N.H. His work as a breeder has passed the experimental stage, and is based on the foundation of the solid business principle of pay as you go and make a profit besides.

It has been a practical matter with him, and instead of ringing to his business a large capital earned in some other calling, he has made his herd pay their way and add their own increase, from the early beginning with one pure bred bull and two or three heifers, less than twenty years since, to the present herd of nearly sixty, of which about thirty are milk cows. Among the latter, as shown by the tests recorded in the Ayreshire Breeders' Year Book, are to be found ideal types of this breed.

Last spring Mr. Yeaton spent a month studying the Ayreshire family in their native home in Scotland, for the purpose of introducing into the herds of America, the best blood obtainable. The effects of this visit will be felt among the breeders of this country.

Hickory Hill Farm is situated on a rolling elevation about two miles from Dover, and contains 200 acres. All of the forage used is raised here, and the cattle are pastured in the summer. Mr. Yeaton has two silos, the first built in 1886, the second in 1894. Both are rectangular, and are made of boards and timber, with tarred paper between two boardings on the inside of the walls in the first. They are still in a good state of preservation.

The second is lined with matched pine. In one a stone and cement basement of eight feet is not as satisfactory as the all wood, except the floor, which is cement.

Mr. Yeaton plants Leaming Corn, one-half bushel per acre, on land ploughed eight or nine inches in depth, using about 20 loads of barn manure per acre, with a light application of commercial fertilizer. The mixture is kept in the barn basement until needed on the land.

An average crop of 20 tons of ensilage corn is cut at the glazing stage, in one-half inch lengths. He cuts from 100 to 105 tons of hay-red top, timothy and alsike clover.

The cows are milked at 5 a.m. The feed at 7 a.m. is, per cow, 10 pounds of feed with grain ration (three pounds Buffalo feed, three mixed feed – wheat – one of cottonseed meal) on top, followed by hay. At 1:30 o'clock, the same meal is repeated, except that the cows giving less than 25 pounds of milk per day do not have feed at the second feed, and those giving less than eight pounds do not have any grain at the morning. They are milked at 5 p.m. and the cow's milk is weighed at each milking & tested by the Babcock teat periodical.

Except what milk is needed to feed the calves – which is fed warm and the cream being used for butter – the product is sold in Dover every morning, most measure, at 6 cents per quart, glass measure being used for a limited list of customers.

Two hired men, employed by the year with a third during the busy season form the farm help.

Mr. Yeaton's breeding stock has been sold to all sections of the country, and the demand is greater than the supply. He is prominent in grange work.

(This summary compiled by Wendy Pirsig from articles in the Counting House Museum archives.  Updated December 2020.)