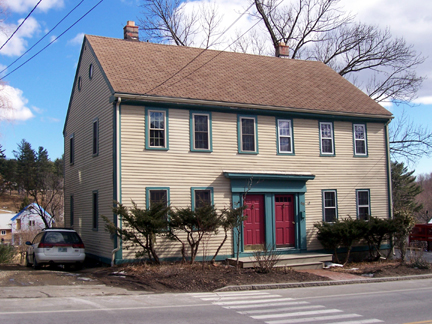 George Goodwin (1796-1861), the paymaster at the Portsmouth Company cotton mill on the river, in South Berwick, Maine, owned this double house for many years on the site of his childhood home, and likely rented half to another mill official or employee through the mid-1800s.  After Goodwin’s death it became the home of John Henry Plumer (or Plummer) (b. 1829-1894), who owned a livery stable across the street and maintained this and other properties for rental income from mill workers.

George Goodwin’s father, blacksmith Jordan Goodwin, bought this property from Gen. John Lord in 1794, and with his wife, Sally, raised their children, including George, born two years later. Lord owned mill rights at the Quamphegan waterfall.  He also built ships at Pipe Stave Landing, and was a partner of Jonathan Hamilton, shipbuilder and West Indies merchant who built the Hamilton House about 1785.

Goodwin’s blacksmith shop near the Landing is mentioned in an 1805 document pertaining to improvements to the “highway” or turnpike that ran on today’s Main Street.

On October 29, 1842, at age 73, according to vital records, Jordan Goodwin “dropped down dead, an honest man.” Jordan and Sally Goodwin were buried at Old Fields Burying Ground on Vine Street. By that time, the Portsmouth Company cotton mill was in full operation.  Their daughter, Eliza, born in 1794, two years before George, had married one of the mill's founders, Timothy Ferguson, in 1811.  This relationship likely eased George's way into his important job as mill paymaster, where his office would have been in the Counting House, the building still standing at the falls today and home of the Old Berwick Historical Society.

Ferguson was one of South Berwick's business dynamos of the early 19th century.  Soon after his marriage to Eliza Goodwin, he bought land along Portland Street and more lots at the Landing with wharves, a cooper shop, and a store, as well as a sawmill on the nearby Great Works River.  In 1822 he bought the Nason homestead at 80 Main Street, one of the Landing's most prominent homes, and the boarding house at 89 Main Street.  He became a partner with the Jewett brothers in building ships, such as the Olive and Eliza, named after his wife.  He built a woolen mill at Leigh’s Mill Pond.  And in 1831 he channeled some of his profits from maritime trade into manufacturing, becoming one of the four principal investors of the Portsmouth Company cotton factory.

After George Goodwin inherited the 68-70 Main property in 1842, he may have replaced the 50-year-old homestead with the current “double house,” which would have provided a rental income to supplement his factory wages.

George Goodwin died in 1861, and the house then was purchased by John Henry Plumer, who lived here while owning and renting several other properties at the Landing up until his death in 1894.

Plumer’s father, John Plumer, owned a successful bakery at 54 Main Street that for decades served the workforce of the Portsmouth Company cotton mill.  Local historian Annie Baer wrote that Plumer “was a most excellent baker; almost innumerable pots of beans and loaves of brown bread were taken out of the side door in the basement of his house, next north of the tavern, Sunday mornings.  Good bread, jumbles, turnovers, and doughnuts grew under his hand.”

Plumer and his son John Henry represented a wave of Main Street landowners—tradesmen and entrepreneurs who staked their claim to the factory prosperity, by buying up rental lots lots in the neighborhood. (An older son, Alexander, became a Congregational missionary in northern Maine).

John Henry Plumer and his wife had no children.  About 1855 his father bought a half-acre lot and William Cromwell’s store across Main Street, and there John Henry built a stable and ran a livery service.  The elder Plumer continued to acquire land through the early 1860s, buying lots on nearby Tremont (Middle) Street and elsewhere in town on the Great Works Road (now Brattle Street) and the Old Salmon Falls Road (now lower Main Street).  He operated the bakery until at least 1870, a few years before he died without a will at the age of 74.

John Henry’s stepsister, Ellen Plumer Wentworth, who had lived in the neighborhood all her life, then bought another of the Plumer properties, the house at 62 Main. So Ellen and John Henry, who still lived next door at 68-70 Main, were the last of the Plumer family at the Landing.  She and her husband Charles K. Wentworth, a farmer and house carpenter, raised two sons here and occupied the house for over 40 years, from shortly after their marriage in 1864 until he died in 1906.