Deborah Brock was a mill worker who lived on a farm at Brock’s Crossing, where railroad tracks crossed the old road to York (the intersection of Highway 236 and Route 91 today).   Her father, Simeon, had owned the farm since 1790, and when he died in 1814, he left his wife, Judith, a widow with five children, ranging in age from 5 to 20. Deborah was the youngest. 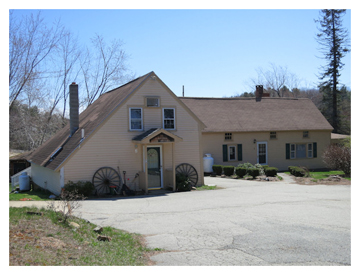 The Brock farm was small—about 45 acres—and provided the family with some income from the corn, potatoes, and barley grown there and the butter they sold from their dairy.  The livestock on the farm was limited to a team of oxen for plowing, a couple of milk cows and some cattle, and a few sheep and pigs.  None of the Brock children married or moved away, and sustaining a household of six on the farm must have been difficult.
When Deborah was 23 the Portsmouth Manufacturing Company started in the business of weaving cotton cloth, hiring young women from neighboring farms, whose wages helped to support their families.  Deborah went to work in the mill, most likely in the spinning or weave rooms, and continued there most of her life.  She walked the mile and a half to work, over the bridge at the Great Works River and past the woolen mill to Factory Street (now Liberty Street), which led  to the mill at the Landing.
Writing about the early days of the cotton mill, Annie Baer, daughter of a watchman at the mill, recalled Deborah Brock as a thrifty and hard-working woman:
“Deborah Brock walked from Brock’s Crossing, so-called, for years, and added materially to her bank deposits by her efforts; with her came her niece, Elizabeth Fernald, who later married Aaron Roberts.  Deborah was known, and is remembered as a good woman and a careful financier.
When years began to tell on her she gave up working in the mill, and attended to her farm.  In time she hired a man [Rufus Trafton] to manage her estate.  He was very pious and had family prayers three times a day.  Deborah endured, and possibly enjoyed these orisons, but when a neighbor congratulated her on the faithfulness of Rufus and enumerated the times he prayed daily, Deborah said tersely: “Yes, but he prays on my time.”
Deborah outlived all of her family.  She managed the farm until her death in 1883, at the age of 74.  But her work at the cotton mill, along with her thrift, enabled her to remain on the farm, and independent, throughout her life.
(From an article by Nina Maurer written for the Hike through History.)