The David Cummings & Co. shoe factory of South Berwick was built about 1872, with a second division added in 1880. The company also constructed factory housing along Norton Street for its mill workers. During the late 1800s, this steam-powered factory employed 350 people making 5000 pairs of shoes per day. Later known as South Berwick Shoe, Inc., and then the Duchess Shoe Company, the mill employed generations of South Berwick residents until it closed its doors in the early 1990s. The town of South Berwick then purchased the property, and the Cummings Mill Apartments were developed. The Cummings Mill is listed on the National Register of Historic Places. 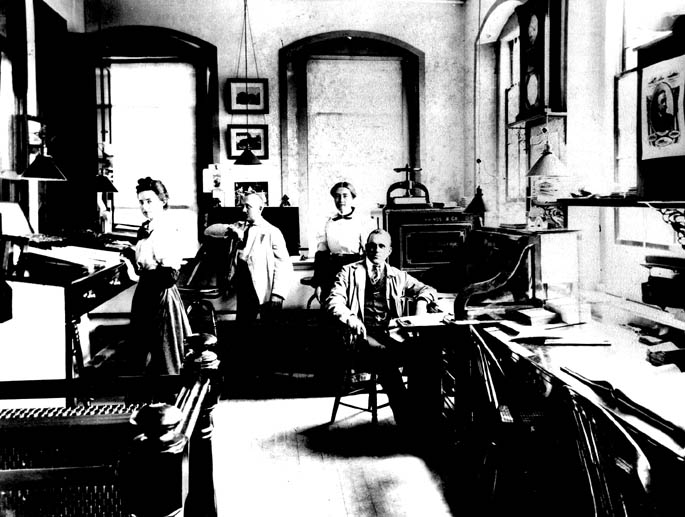 The story of the Cummings Shoe Factory is associated with the Great Chicago Fire of October 1871, according to the late South Berwick resident Jerry Blackmore, a longtime friend of the Cummings family who collected their history. Blackmore said one of the thousands of businesses destroyed in Chicago was a shoe factory owned by the family of David Cummings, who built the South Berwick shoe factory the next year. Details about this business in Chicago, perhaps operated by his brother Sylvester, are currently unknown.

-- David, born in Middleton, Massachusetts on June 24, 1827. He and his wife, Olive Ross of Danvers, had no children. The 1901 History of Sanford by David Emery says David Cummings became a shoe manufacturer in Worcester, with a wholesale store at 134 Summer Street, Boston, before building the South Berwick factory.

-- Samuel Augustus, a manufacturer of shoe knives, was born in Middleton, November 4, 1829, and married to Julia Ann Perley of Boxford.

-- Sylvester, born in Wenham, November 20, 1835, married Mary Jane Otis. They are said to have resided in Chicago, where their son William I. Cummings – later owner of the Cummings Factory in South Berwick – was apparently born.

In the 1860s, while David Cummings was making shoes in Massachusetts, his younger brother Sylvester opened a factory in Springvale, Maine. History of Sanford reports, “In 1864, Sylvester Cummings built a shoe manufactory on the west side of the river at Springvale, just below the upper bridge, at a cost of about $10,000, which was successfully run by Cummings and Co., superintended by P. E. Cummings, partner and superintendent. They moved all their machinery from Worcester, and made ladies shoes, about eight cases a day, employing one hundred and fifty hands, and doing $50,000 worth of business annually. They used machinery, although the work outside, sewing, stitching, and binding, was done by hand. In 1872, they removed to South Berwick.” A Bicentennial History of Sanford, ME, by the Sanford Historical Committee, 1968, reported that in 1864 a Sylvester Cummings had built a shoe factory on the west bank of the river on the present Mill Street, Sanford. “The machinery came from Worcester but much of the sewing, stitching and binding was done by hand by men and women working at home,” states this account. “David Cummings was operating the factory in 1872, the year it moved to South Berwick."

The David Cummings & Co. shoe factory of South Berwick was built about 1872 at the corner of Norton Street and Railroad Avenue, on the farmland that once had been known as “the Plain” and used for militia drills. To house its mill workers, the company also constructed factory housing along Norton Street, much of which survives today. Cummings & Co. added a second division in 1880.

The David Cummings & Co. shoe factory and housing on Norton Street, from a South Berwick map of 1872.

According to Blackmore, the Cummings mill was a state-of-the-art facility for its time, eventually employing 350 workers and making 5000 pairs of shoes per day. Unlike South Berwick’s textile mills that ran on river waterpower, the new factory used steam engines generated by coal and waste chips. A spring fed a 3600 gallon water tank in the factory belfry, and even supplied the factory houses in the neighborhood. Steam energy ran an endless cable to power a carpenter shop where wooden shipping boxes were constructed for the shoes. In the early days, kerosene lamps illuminated the workplace and homes of “Shoetown.”

At right, excerpt from a South Berwick lithograph of 1877 by Ruger and Stoner. The Cummings Mill is at the corner of Norton Street and Railroad Avenue, with worker housing shown at lower right. The Freewill Baptist Church is at upper left, at the intersection of Main, Butler and Salmon (now lower Main) Streets, and is depicted as it looked before the erection of the steeple. 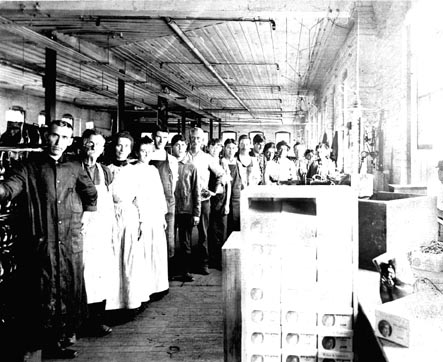 The factory made use of its proximity to the railroad, and the nearby station was named Cummings Station. The installation of a town clock on the new steeple of the nearby Freewill Baptist Church in 1890 was undoubtedly related, at least in part, to the surge in activity in the neighborhood brought about by the Cummings mill. At the turn of the century, many South Berwick workers had originated in Quebec, Canada.

Below, excerpt from a map of  Colby’s Atlas, 1884. The Cummings railroad station on Railroad Avenue is at the top.

His factory was a meticulously run operation, Blackmore recalled. Employees arrived on the job at 7 am and worked until the departure of the 6 pm streetcar on weekdays, and until noon on Saturdays, at which point the window shades throughout the building were pulled down exactly half way. Business prospered, grass was mowed, streets and sidewalks cleaned. At Christmas each employee received a $10 bonus, a calendar and a box of chocolates.

On September 22, 1890, William's father, Sylvester Cummings, 54, died suddenly in Springvale. There is some evidence he had been indicted for barn burning and killed himself with poison. In 1909 Willie built for his mother Mary a 13-room mansion at 75 Railroad Avenue, on seven acres, complete with veranda, carriage house, summer house, pergola, garden shed and three barns. He also raised prize "Berwick" sheep as a hobby. In 1925, Cummings served on a seven-member school committee overseeing the construction of the new South Berwick Central School.

Willie, who was 40 in 1909, had never married. In 1940, however, at age 71, he wed 60-year-old Louise Kohlrausch. After Mary Cummings' death the next year, the couple moved into the Cummings mansion. The house included such amenities as a telephone room, a chamber intercom and beautiful brass electrical fixtures.

With the arrival of the Great Depression, the Cummings company had faltered. In 1932 it was taken over and renamed South Berwick Shoe, Inc., and in 1946 William I. Cummings died in his factory office at age 77. Louise Cummings lived until 1961. They are buried in South Berwick's Woodlawn Cemetery with his parents, Sylvester and Mary Jane Cummings, and his older sister, Nellie F. Cummings (1862-1883).

For almost four decades after Willie Cummings' death, the factory continued to employ South Berwick residents and produce footwear, ultimately as the Duchess Shoe Company, until it closed its doors in the early 1990s.

Huge boot on a parade float in front of the factory

The town of South Berwick then led efforts to restore the vitality of the “Shoetown” neighborhood, purchased the factory property in 1995 and opened South Berwick Community Center with an active recreation department, senior center, playground, and fire and rescue service. Cummings Mill Apartments developed the historic mill building with one and two-bedroom apartments. Along Norton Street, much of the former Cummings worker housing has been restored.

The Cummings Mill is listed on the National Register of Historic Places.

(This summary was written by Wendy Pirsig with information from the Counting House Museum archives, and updated in December 2020.)