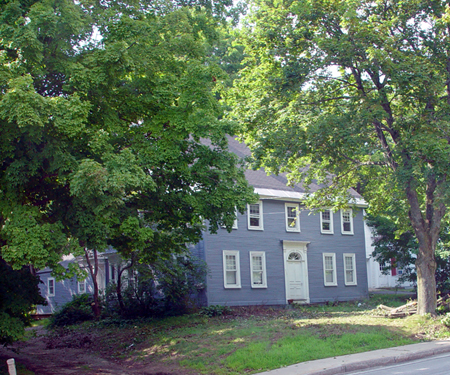 This building is part of the South Berwick Village District on the National Register of Historic Places. A map of 1856 indicates this was the home of packet captain Samuel W. Rice, who lived from 1784 to 1858.  He was probably author Sarah Orne Jewett's great uncle, is buried in the Portland Street Cemetery near her family, and would have helped inspire her many stories about sea captains.

The Rice House may have been built by the Rollins family around the turn of the 19th century and been an early home of William Allen Hayes.  Judge Hayes' daughter, Sophia Hayes Goodwin, wrote late in life of a childhood story told by her brother, John Lord Hayes, who was born in 1812.  “ In the year 1814, when I was two years old,” John is supposed to have said, “...we lived in the Rollins house (afterwards occupied by Captain Rice and now by Mr. Sanborn) on Main Street. I remember just at evening seeing several horsemen galloping through the street followed by a number of excited men. The horsemen crying, ‘Peace, Peace!' This was the announcement of the close of the War of 1812.”

The Rollins family associated with the house is not known, but architectural features and documentary evidence indicate the house might have been moved, perhaps from the Charles N. Cogswell /John B. Nealley property at 169 Main Street.  Cogswell was a law partner of Judge Hayes; their office was upstairs in what then was the Parks Store, which still stands on Main Street.  Hayes moved to Academy Street in 1816.

During the 1820s, Samuel W. Rice and his wife, Ruth F. Rice, seem to have moved here about the same time the family of author Sarah Orne Jewett first came to South Berwick.  Capt. Rice's sister seems to have been Mary Rice Jewett (c. 1785-1854), the wife of Capt. Theodore F. Jewett, who moved into the nearby Jewett House in the 1820s.  Capt. Jewett was the author's grandfather.

Records indicate Ruth Rice joined the First Parish Church (Congregational) in 1825, about the time it was being built at the corner of Main and Academy Streets. Their son, George Samuel Rice, was baptized at their house on July 3, 1826, perhaps when the new meeting house was not quite yet finished.  (Another Hayes child, Augustus, was baptized a few weeks later.)

It would seem that Samuel W., who was known as “Captain Rice,” may have been a packet captain.  Whether he navigated at sea or on the Salmon Falls River is not known.  An 1835 stock certificate shows “Sam Rice, A. Peirce and Asa Perkins” as directors of a firm known as the Despatch Line of Packets.  At the time, the Portsmouth Manufacturing Company cotton mill was in operation at nearby Quamphegan Landing on today's Liberty Street, and Capt. Jewett had been a founder of the company in 1830.

Rice seems to have come from a family of both blue-water captains and river men.  They owned the Rice Tavern built in Kittery in 1777.  It was associated with a ferry the Rices operated across the Piscataqua River between Kittery and Portsmouth, NH.

In 1781, the father of Capt. Samuel W. Rice, Samuel Rice, Jr. of Portsmouth, NH, had commanded Jonathan Hamilton's privateer, the FANCY, also owned by Robert Stevenson of Kittery.  In 1785, Hamilton and Rice co-owned two vessels. One, the 179-ton brig POLLY, was built in South Berwick at Pipe Stave Landing, at the Hamilton House, then under construction.  The other was the schooner DOVE, 64 tons, built in Kittery.  Samuel Rice, Jr. was master of the POLLY on its first voyage, in 1786, to the West Indies, and seven other ships.  He had a store near Hamilton's on Fore Street in Portsmouth, now part of Market Street, and died about 1803. Samuel Jr.'s brother William Rice was also a privateer captain, and another brother, Alexander Rice, operated the Kittery-to-Portsmouth Rice's Ferry in the late 1700s, and later the Eastern Stagecoach between Portland and Portsmouth.  Two of their sisters, Elizabeth and Mary, became wives of Kittery shipbuilder William Badger (1752-1830), whose name is still connected to Badger's Island in Kittery today.

Capt. Samuel W. Rice died in 1858.  His widow, Ruth, then moved to Claremont, NH.  In 1872 the house was occupied by an S. Hatch, and later, apparently, by a member of the Sanborn family.