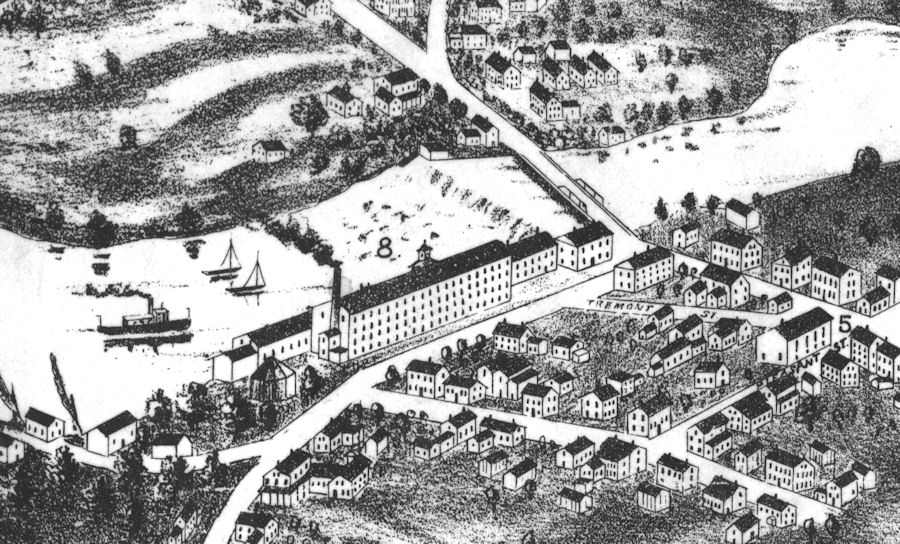 Quamphegan 1877 lithograph by Ruger and Stoner shows the Portsmouth Manufacturing Company textile mill on the South Berwick side of the river, with the Counting House right at the bridge. A likely site of MacPhaedris' mill was also on the Rollinsford side of the river, top. Image from the archives of the Old Berwick Historical Society.

The fortune that supported the Warner House in Portsmouth, New Hampshire, came, at least in part, from a sawmill complex at Rollinsford, New Hampshire, and South Berwick, Maine.

Excerpt from tracing of circa 1665 map, courtesy of Maine State Archives, shows Portsmouth at bottom and Quamphegan falls at upper right. Indian attacks occurred along the Salmon Falls in 1675 and 1689/90, the Quamphegan site burning during the latter conflict, known as King William's War. But the falls were so important that such dangers did not discourage determined settlers for long. Among late 17th century investors were John Hull, mintmaster of Boston, and Samuel Sewall, a judge in the Salem witchcraft trials.

About ten miles up the Piscataqua/Salmon Falls River from Portsmouth, a waterfall on the Maine-New Hampshire border marks the head of tide and of river navigation. Known as Quamphegan by the Indians, it was a camp and fishing spot until 1650, when the local Wabanaki leader known to the English as Sagamore Rowls sold it to Thomas Spencer, a settler involved in the lumber trade. Spencer bought the area for “Five Pounds and ‘the grace of God,'” according to local historian Annie Wentworth Baer, whose papers are conserved at Dover's Woodman Institute. A series of other owners then harnessed the falls over the next 350 years, as the land on each side of the river became part of Rollinsford and South Berwick.

Unlike South Berwick's Lower Landing at the Hamilton House (also called Pipe Stave Landing), where the water was deep enough to accommodate tall ships, the Upper Landing at Quamphegan was reached only by gundalows, canoes and other shallow-draft boats bringing cargoes upstream on the tide. Heading downstream, vessels laden with lumber processed by water power had a route to Portsmouth and the sea.

Among Quamphegan's mill owners of this period was Archibald MacPheaedris, who built the Warner House in 1716-1718. According to sources that include Baer's work and Landmarks in Ancient Dover by Mary Pickering Thompson, published by Durham Historic Association in 1965, the sawmill property MacPhaedris owned was in both present-day Rollinsford and South Berwick, just downstream from the bridge. 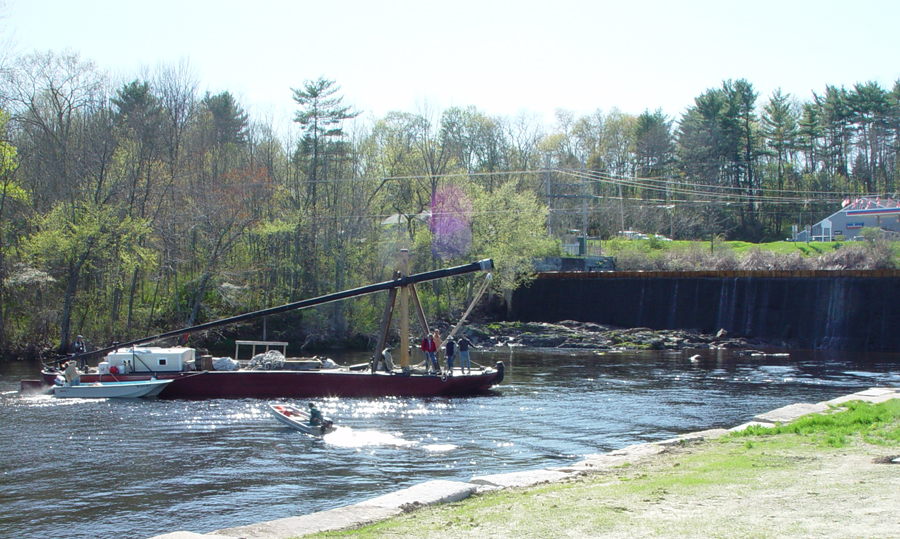 The gundalow replica Captain Adams at Quamphegan in 2005. Photographed from the South Berwick landing, the photo shows a likely site of MacPhaedris' mill on the Rollinsford shore behind the gundalow. The dam is at right, and beyond it a glimpse of a convenience store by the Route 4 bridge.

Thompson states that at the Quamphegan falls, “Capt. Thomas Wiggin and Symon Bradstreet erected a saw-mill, mentioned the 5th, 10 mo., 1652, but it was soon extended to the neighboring district on both sides of the river.” The mill passed through a succession of owners until Thomas Abbott, Sr., “conveyed it, Jan. 30, 1710, to his son Joseph, who sold it to Archibald MacPhaedris Nov. 9, 1717. Archibald MacPhaedris of Portsmouth and wife Mary conveyed this same tract to Benjn. Wentworth Ap. 12, 1725. The deed declares it to be ‘in Dover, at a place commonly called by the name of Quamphegan, bounded north by Mr. Broughton's.' etc. Capt. Benjn. Wentworth seems to have settled on this land. He lived near the present turnpike bridge, on land owned by the late James Rollins.”

Capt. Benjamin Wentworth was married in 1717, according to the 1878 The Wentworth Genealogy: English and American by John Wentworth, which also mentions the MacPhaedris purchase. Benjamin was the brother of Col. Paul Wentworth, whose c. 1701 house is owned by the Association for Rollinsford Culture and History (ARCH).

MacPhaedris in this period was an “opulent merchant” of the Piscataqua, in the words of 19th century historian Charles W. Brewster, who identified MacPhaedris' association with the Lamprey River Iron Works in present-day Barrington, NH. His Quamphegan investment was likely at least as profitable as the one on the Lamprey.

“By 1700 Portsmouth was a frontier boomtown that turned trees into money,” writes Matthew Bampton in Cross-Grained and Wily Waters. “All parties competed for the largest trees and those closest to waterways.” MacPhaedris' location was prime; the lower Piscataqua had been clear-cut of mast pines by the end of the 1600s, and by the early 1700s even the next section of the interior had been stripped of the most valuable trees, thus raising Quamphegan's importance as the gateway to the lower river by ox teams bringing trees out of more distant forests on both the Maine and New Hampshire sides.

Photographed in 2005 from a likely site of MacPhaedris' mill in Rollinsford, the Quamphegan dam is at left. The 1831 Counting House Museum in South Berwick and the 1917 hydroelectric plant are at center. At right is today's Counting House Park at Quamphegan Landing.

In addition to Quamphegan's significance as a waterpower site and the head of navigation, the site also allowed the crossing of the Piscataqua/Salmon Falls at a time when bridges did not exist downstream. Historians believe a log boom bridge first spanned the river at the falls in the 17th century, providing the beginnings of overland travel between Maine and the other colonies. In the late 1700s, the Boston-to-Portland Turnpike crossed here, bringing stagecoaches carrying the United States mail.  New Hampshire's Route 4 from Dover through Rollinsford travels over a 20th century bridge and joins Main Street in South Berwick. 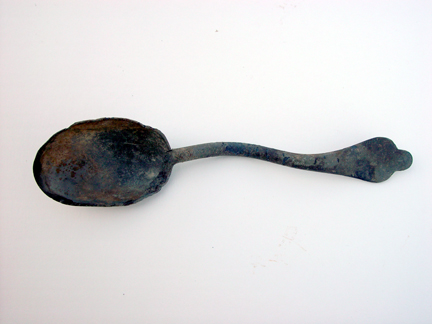 A pewter spoon typical of about 1700 that must have belonged to one of Quamphegan's early families was found on the river bottom during maintenance work on the dam in 2001. It is now part of the collection at the Counting House Museum.

After MacPhaedris' lifetime, small mills at Quamphegan continued to process grain and lumber until the advent of large textile factories in the early 1800s. Then the Portsmouth Manufacturing Company, a large brick complex, manufactured cotton cloth from 1830 to 1896 on the South Berwick side. This factory was demolished, and all that remains is the mill agent's office building that became the Counting House Museum, home of the Old Berwick Historical Society. A hydroelectric plant built in 1917 still uses the power of Quamphegan Falls to generate electricity. The Rollinsford side of the river has returned to pasture and woods.