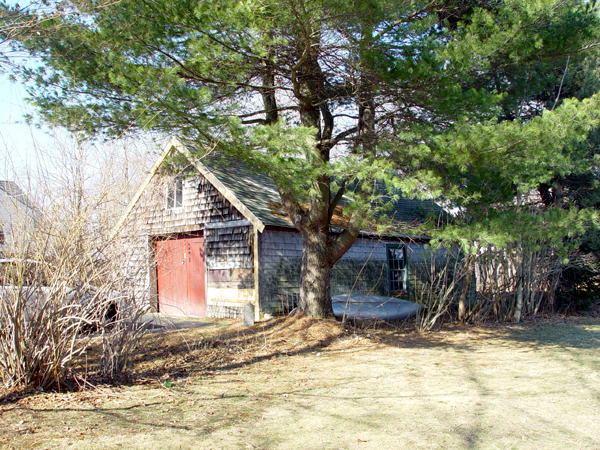 This house is part of the South Berwick Village District on the National Register of Historic Places. Micajah Currier (1774-1818) was a postmaster, leading merchant and landowner who bequeathed the land that became Portland Street Cemetery. About 1795 he is thought to have built this small cape, where he lived alone or with a small household. During his life, though he wasn't married, the house was well furnished and had an adjoining stable with a chaise carriage.The shingled outbuilding behind this house is identified as a blacksmith shop on a map of 1927, and seems to have been built within that decade.

Currier’s sister Deborah married lawyer William Burleigh just before Currier’s death in 1818, and in his will Currier appears to have left the couple land adjacent to this house. There they built their large home, Burleigh House, and Burleigh went on to get elected to Congress.

Currier owned the Currier Brown Store, now 12 Portland Street, and was listed as the town postmaster in 1816. He left the store to his sister Hannah Brown and her son Micajah.

Previously from Dover, NH, Currier in South Berwick was an active member of the Baptist Church that since the late 1700s had stood at the later site of the Soldiers’ Monument. His will called for the creation of Portland Street Cemetery on Agamenticus Road, on land not far from the church that he bequeathed to the town. His tomb was probably the first grave there, and his will called for the remains of another sister, Mary, to be brought from Dover and placed with his. She had died in 1814 at age 28.

Currier’s will also hints at his many business affairs. He owned shares in the Dover Turnpike, the highway (later Route 4) that brought mail, travelers and stagecoaches from New Hampshire into Maine through South Berwick and out again on Portland Street toward North Berwick.

He owned at least two mills, probably in North Berwick, then called Doughty’s Falls, where he also seems to have owned another store and another home with a barn and land. One mill was for processing wool and another for making oil, probably linseed oil from locally grown flax.

Currier also had a wharf on the Salmon Falls River in Rollinsford, NH, property on the South Berwick side of the river at Quamphegan Landing near today's Counting House, and other South Berwick land near Great Hill, where another Baptist Church had been founded in 1768 on today’s Hooper Sands Road.

Currier was only 42 when he died on February 22, 1817, a year after signing his elaborate will. The cause of death is not known. The first item in the will called for a bell the size of one on the Dover meeting house to be engraved with his name and hung in downtown South Berwick, if inhabitants found a location. No such bell has been found.

Four months after Currier died, his sister Deborah gave birth to her first son, and she named him Micajah Currier Burleigh. The Currier House stayed in the family for many years.
Excerpt from South Berwick map of 1856 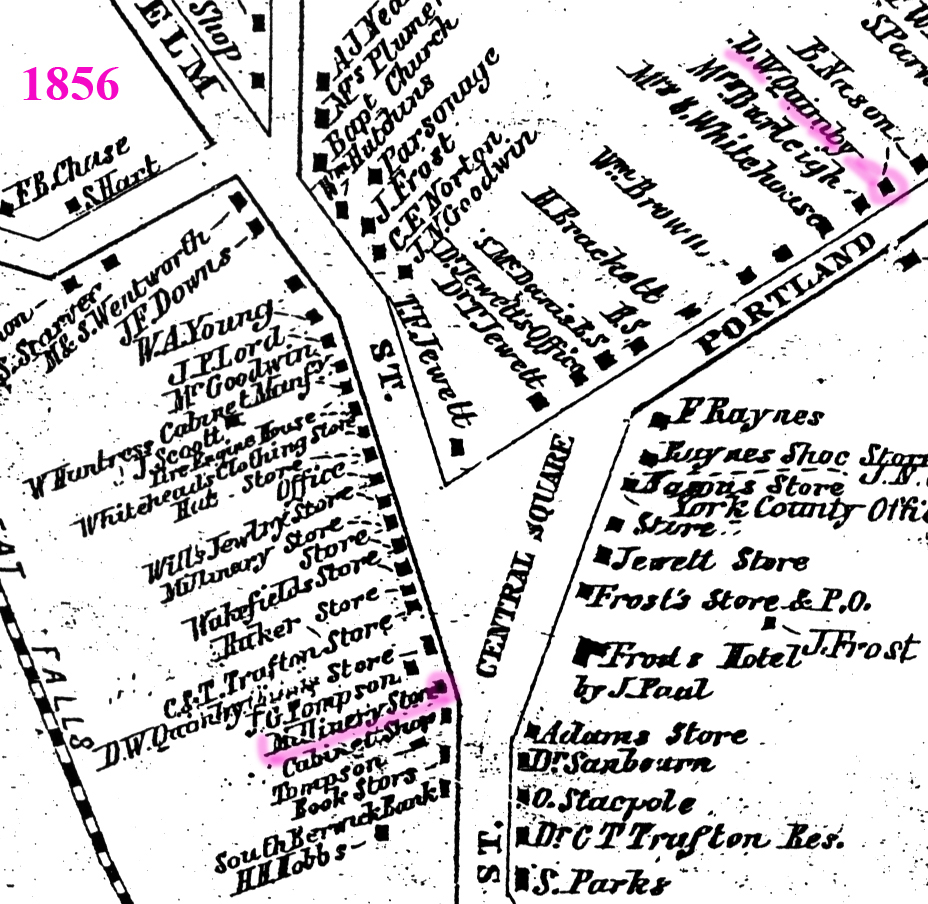 Later owners.  In the mid-1800s, Currier House was occupied by Daniel W. Quimby, a merchant who for a time ran the Main Street business that had been known as the Parks Store, as well as a store at South Berwick Junction, the railroad depot called Agamenticus Station that once stood near today’s intersection of Emery’s Bridge and Knight’s Pond Roads.

Almost two decades later, a map of 1872 shows the Portland Street cape occupied by Mrs. Lucinda Linton, who had owned a millinery shop.

Excerpt from South Berwick map of 1872.

Blacksmith shop. About 1915, the shed behind Currier House was built as a blacksmith shop, as identified on a 1927 Sanborn insurance map. 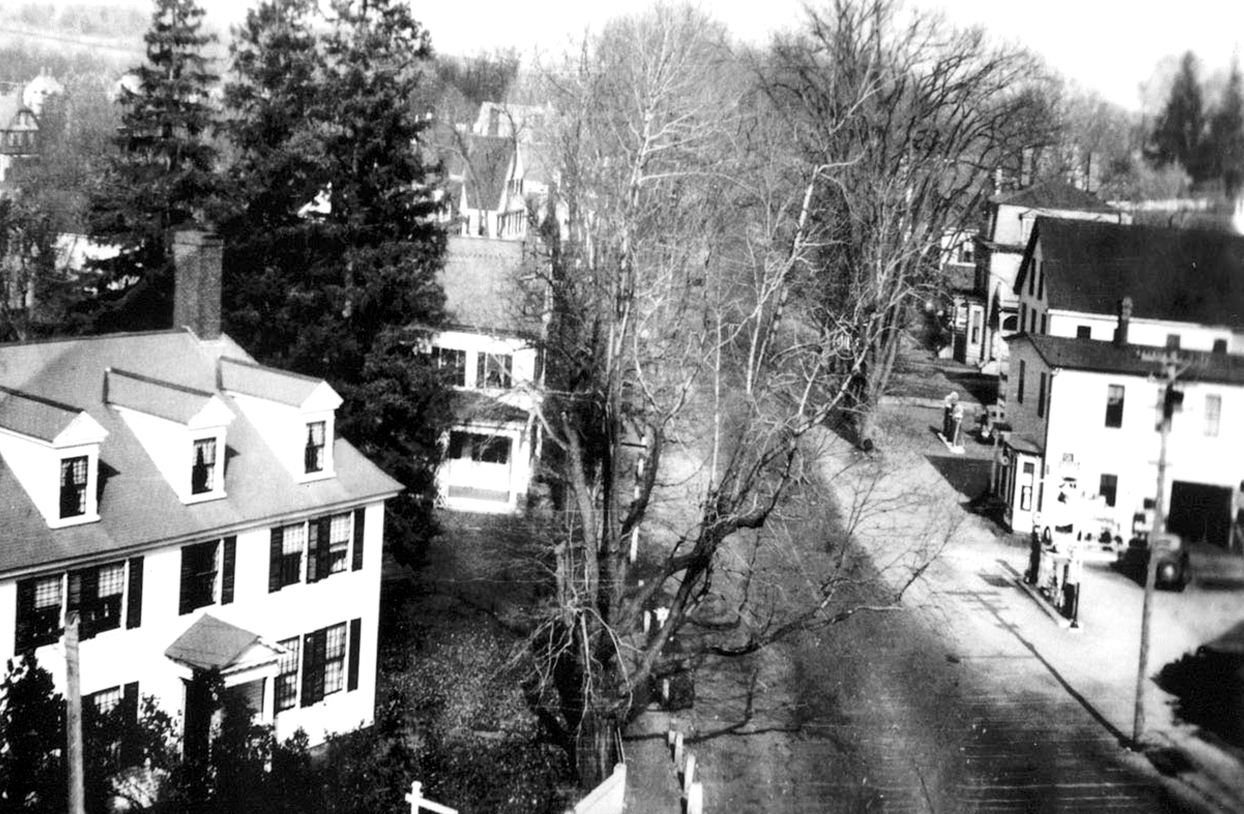 By then the Huntress harness shop that had stood across the street for decades had been replaced by a filling station. So a blacksmith’s services were not in great demand much longer.

Above, Portland Street, early 1900s, with gas station at right. The Jewett House is at left.