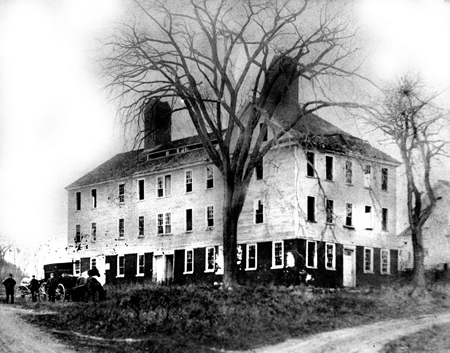 The census of 1790 reports that Alexander McGeoch, an Irish-born innkeeper and town constable, lived here in a two story house that was home to two men, three women and girls, and six boys. The location was on Liberty Street at Main Street, South Berwick, Maine, by the bridge and directly opposite the Counting House today.

After McGeoch's death in 1824, the Portsmouth Company cotton mill opened and attracted boarders who needed housing.  In the early 1830s, the company fitted out the McGeoch house on the first floor as a dry goods store and grocery; a family named Luke, who kept boarders and worked in the mill, occupied the second floor.  About 1836, the McGeoch House was replaced by or incorporated into a large, three-story ell to provide lodging for additional workers.  The building became known as the “Hash House,” a reference to the cheap but filling meals served there to generations of mill employees. In an account of the Landing neighborhood, local resident George Washington Frosst, who grew up in the 1830s, recalled families who lived there: the Whidden family, the three Estes sisters, the widow Hanson and her two sons.  The Hash House was torn down and replaced by a garage in the early 20th century.