Some Old Families of Shorey’s Brook 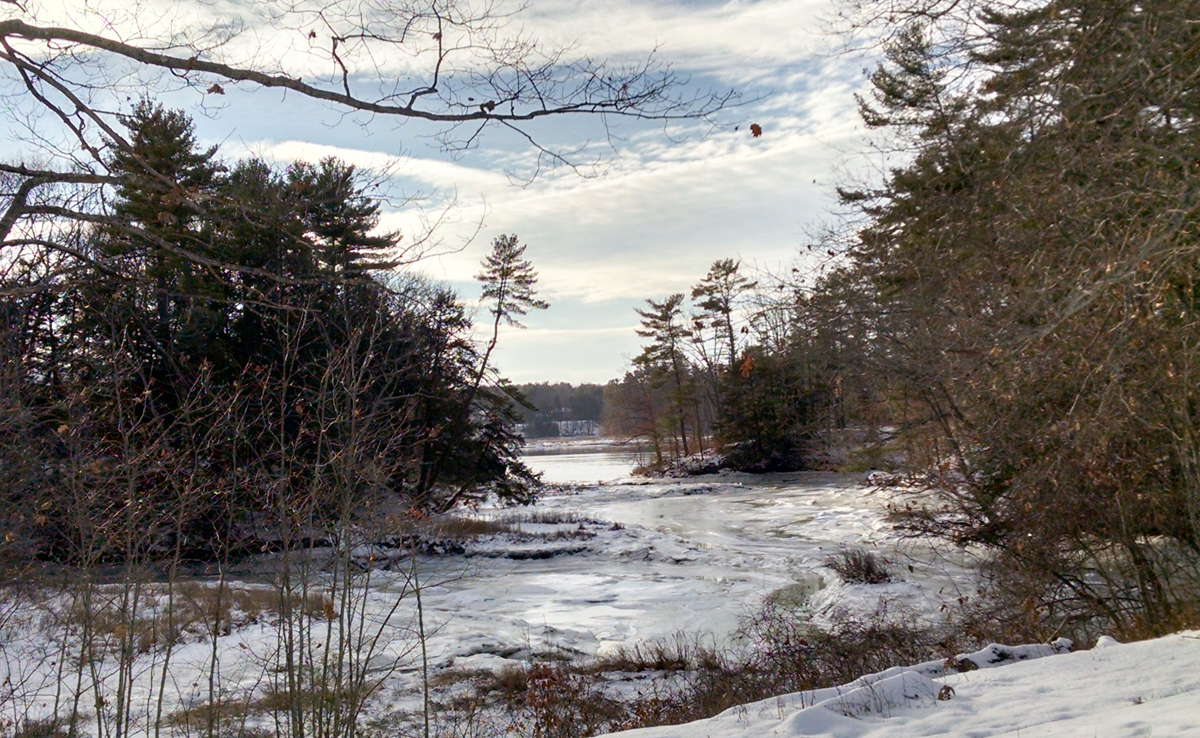 Shorey's Brook in the Raymond & Simone Savage Wildlife Preserve of the Great Works Regional Land Trust, with the Piscataqua/Salmon Falls River in the distance and New Hampshire beyond.  At left is the former land of William Furbish in present-day Eliot. Miles Thompson's land is at right.

Shorey’s Brook, the creek that empties into the Piscataqua/Salmon Falls River and forms part of today’s border between South Berwick and Eliot, Maine, was home to two young settler families in the late 1600s.

A land of plenty

At the arrival of English settlers, the region was forested with gigantic white pines, many with trunks of eight feet or more.  These trees represented a seemingly limitless resource, and the wildlife as well.

“In dark evenings when they are upon the fishing grounds,” 17th century English explorer John Josselyn (1638 – 1675) had written after visiting New England, “the Indian lights a piece of dry Birch Bark… and holds it over the side of his Canow…Sturgeon mounts… where he is slain and taken with a fish gig.”

“The annual springtime bloom of phytoplankton turned coastal waters murky brown,” and attracted fish, according to Jeffrey Bolster in The Mortal Sea, 2012. The Piscataqua and Salmon Falls River estuary system was plentiful in anadromous fish such as shad, alewives, smelt, salmon, sturgeon and bass, that made spawning runs. For generations Native Americans had netted fish in great numbers after the ice broke each spring.

Sturgeon Creek is the name given to another brook that empties into the Piscataqua about a mile south of Black Brook. Sturgeon could be 12 to 18 feet long and over 600 pounds during the first decades after Europeans arrived. The Indians also traded them.  The huge fish were sometimes pickled and shipped to England, where seafood had been overfished and was far less plentiful.

But the timber industry damaged the ecology of the river and the brook.  Sawmills ranged along the river at Quamphegan, Great Works, and elsewhere. Details about the early harnessing of the Thompson's Brook for sawmilling and grain grinding are not known, but the practice seems likely, as water power was used in streams of all sizes, at least at times of the year when plenty of current moved. Sturgeon Creek in Eliot, for example, had mills since 1654, perhaps built by carpenters like Thompson.

Thompson’s birthplace is unknown, but after settling on his land he was made sergeant in 1659, and a selectman in 1659 and 1661, when Kittery’s borders included all of today’s Kittery, Eliot, South Berwick, Berwick and North Berwick.  Thompson and his wife Ann, who was 31 when they first began farming here, had eight children.

By 1664 they gained immediate neighbors who soon had a family of seven.  They were William and Rebecca Furbish (also spelled Forbis or Forbes, among other variations). He had acquired 80 acres south of the creek at the end of a tumultuous 15 years that he began as a soldier named William Forbes in Scotland, fighting the forces of Oliver Cromwell in the Battle of Dunbar in 1650.  Taken captive, he was brought to Boston aboard the ship Unity to perform hard labor, and is believed to have served out his indenture in or near Dover, New Hampshire, where he was first recorded as paying taxes in 1659.

A Furbish descendant, Craig Stinson, who researched his ancestor, has estimated his servitude lasted eight years, whereupon he pursued a livelihood in Dover. Then in 1662, the Puritan authorities arrested three Quaker women for professing forbidden doctrine, and beat them while they were forcibly marched half naked for 80 miles through several local towns.  A William Furbish is recorded as being punished in the stocks for criticizing the Dover minister’s laughter at the Quaker women’s suffering.

Scotsmen in a strange land

Stinson writes, “..the Scots stuck together, joined by a shared history and a dialect that sounded strange to English ears.  The New England settlements in which they found themselves were steeped in Puritan sensibilities.  This stuck in the craw of many of the Scots, since it was Cromwell’s Puritan army that had subdued them and taken them into captivity…Scottish settlements tolerated a more boisterous lifestyle that determined to be free from Puritan authority and mores.  When the English authorities did intervene in these places it was often to attempt to enforce church attendance or to fine the Scots for drinking or using coarse language.”

So it was with William and Rebecca Furbish, neighbors of Miles and Ann Thompson.  In New Hampshire in 1674 and in Maine in 1686 Furbish was prosecuted for getting Indians drunk.  In 1679 the Furbishes were fined for striking the constable, and in 1683 for talking against the government. Historian Everett Stackpole wrote, "He was punished in 1681 for calling His Majesty’s authorities 'Divills and hell bound,' thus showing his lasting antipathy to the rule of Englishmen."  (History of the Town of Durham, New Hampshire, 1913)

Any connection or reaction to these episodes by the Thompsons is not known.

But the Furbish court records may not reflect just the lifestyle of Scotsmen and their outlaw status.  Maine was a more diverse and independent area than Massachusetts Bay Colony.  Many English residents of Kittery and Berwick had issues with the authorities. In 1679 both Furbish and Thompson joined about three dozen of their neighbors – both English and Scots -- in a petition for “direct government,” citing the “suppression of religion” by Massachusetts authorities.

And all of them had bigger problems.  By the 1670s and 1680s the Thompsons and the Furbishes were supporting 15 children on their farms.  But the fish were dwindling.  The towering forests by then had been clearcut, and massive timber production had polluted the rivers and creeks with silt and sawdust.  Dams blocked the anadromous fish from mounting the rivers to spawn, and their numbers plunged.  Sturgeon and salmon disappeared from the waterways that bore their names.

Worse yet, the country experienced a series of military conflicts with the Indians and their French Canadian allies. These outbreaks outlasted the Thompsons’ and Furbishes’ tenures on this land.  Rebecca Furbish died, and during the second round of violence in 1689, William, after marrying a woman named Christian, moved with her to New Castle, NH, and relative safety on the coast. He died in 1694.

The Thompsons’ daughter Sarah married James Goodwin and moved to his home in what is now the Old Fields section of South Berwick, but he was shot to death while working in his fields in 1687.  Miles Thompson died about 1705, soon after the death of their son John, and Ann about 15 years later.  Two of the Furbishes’ sons left the area, John dying at sea and William, Jr. in South Carolina.

Historian Everett Stackpole explained that after the peace that lasted from July 1713 to June 1722, “what is sometimes called Lovewell's War” broke out for three years. Miles and Ann Thompson’s son Miles had acquired a farm and family near Love’s Brook in present-day South Berwick, but was killed in an attack in May 1724 and his son taken captive to Canada, returned after a year.  “A man by the name of Stone was mangled and scalped near where Thompson fell,” Stackpole wrote, “but he survived and lived to be an old man. Sullivan says, ‘His life was miserable; he wore a silver caul on his head, went on crutches, and had the use of only one hand, and was subject to strong convulsion fits.’"

Other children of the Thompson and Furbish families married neighbors, remained in the area, and persevered.  Daniel Furbish, William and Rebecca’s first son, had been born during their first years on Thompson's Brook.  He married Dorothy Pray and they had 11 children.  Daughter Hopewell married Enoch Hutchins (and later William Wilson), Bethiah married Joseph Goold downstream on the Salmon Falls, and Catherine married Andrew Neale, son of another Scotsman upstream.  Ann Thompson (daughter of Miles and Ann) married Israel Hodsdon (later Robert Evans).  Amy Thompson married Daniel Goodwin, and her brother Bartholomew is also believed to have married.

Mary Thompson married Thomas Rhodes, and their daughter, Mary, in 1702 married Samuel Shorey, and Thompson Brook then took the Shorey name. The turn of the 20th century periodical Old Eliot indicates Samuel Shorey’s house may have been built about 1714. “It is described as a one story house with three gables, and an addition at the back. It must have been the best house in that locality.” James Sullivan, in his History of Maine, 1795, says: "On the south bank of a brook which divides Kittery from Berwick, on the main county road up the river, was a fort, standing in the year 1750, called Shorey's Garrison." Jacob Shorey was a soldier in the Blue Troop of Horse in 1757, and Jacob Shorey, Jr., lived in the house in 1795.

And finally, one marriage joined the Thompson and Furbish families together.  About 1698 Thomas Thompson, Miles and Ann’s youngest child, married Sarah Furbish, daughter of their neighbors William and Rebecca.  Miles deeded them the entire Thompson homestead of 80 acres and livestock, and lived with them during his final days on Thompson (soon to be Shorey’s) Brook.  The younger Furbishes had at least five children.  In the early 20th century, historians said, a graveyard with about 30 unmarked stones could still be seen along the river. Furbish and Shorey families appear on 19th century maps, and the slope rising to the highway above the brook is still marked today as Furbish Hill.

Summary by Wendy Pirsig from archives at the Counting House Museum, with research assistance from Tad Baker, Norma Keim and John Demos. Updated December 2020. Sources include:

Old Kittery and her Families by Everett S. Stackpole, 1903

The History of the District of Maine by James Sullivan, 1795