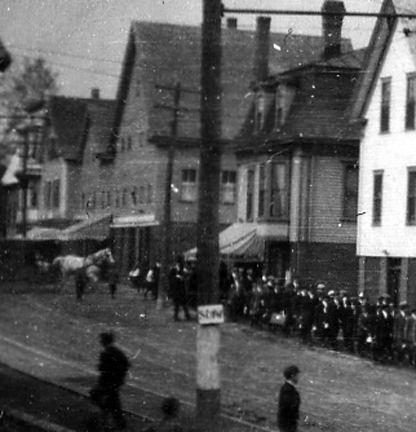 In the town report of 1900, Joseph Roberge, baker, advertised his cream bread baked in “Happy Valley, So. Berwick, Me.”    His bakery appears on a 1901 map as Confectionary/Bakery with brick oven section, and the oven may have remained a century later.  Joseph Roberge lived upstairs in this building, according to family accounts.  About 1918, nephew Albert Roberge Sr. then opened a confectionery in part of the building just before he was married.  After his business had moved to the 431 Main Street location across the street in the early 1920s, the store belonged to Fred Dube, a wholesale grocer, according to Roberge family accounts.  In the lot behind this store was a water tower, and Joseph Roberge ran the water company that supplied the entire Point neighborhood.

Joseph Roberge, Baker, Happy Valley, So. Berwick, Me.   “Home Made Pastry is what you get from my bakery and a trial of the same will convince you that my statement is absolutely correct.  Everybody who has used my CREAM BREAD will tell you that it is the best made.  If my drivers do not call on you send me a postal for a Window Card and they will in the future.”    —1900 South Berwick Town Report