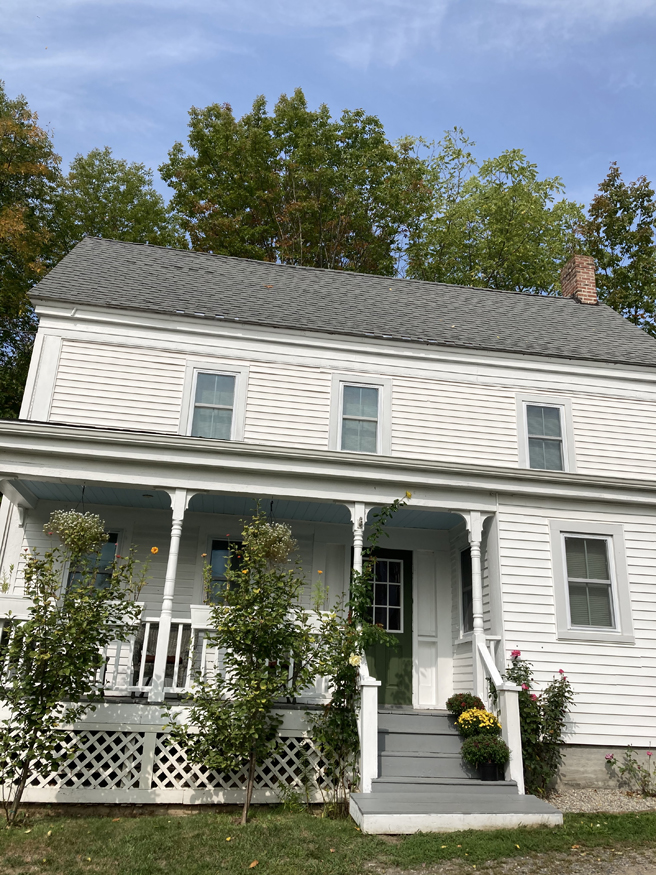 Perhaps built as early as 1815 for an unknown owner, this house set back from Main Street was originally a tiny house with two rooms downstairs, two rooms upstairs, and a center stairway. It seems to have been operated as a rental through much of the 1800s, when the Portsmouth Manufacturing Company was producing cloth. A map of 1856 indicates it was occupied by a merchant named William Hutchings. A Hutchings family also lived at the Landing decades before, perhaps on the site or not far away.  Records show that in 1796, a Joseph Hutchings, from Portsmouth, married Esther Nayson (Nason), and by 1805 had a boat-building shop near Main Street. The Nasons were major property owners across Main Street from the Hutchings property in the early 1800s, when merchant Benjamin Nason owned a dwelling house, store, and outbuildings.

A deed of 14 April 1824 shows merchant trader Timothy Ferguson (1788-1839) purchasing a parcel of land from Samuel Hale Jr. of Portsmouth and his wife Ann for $300. The property was bound by the highway in front of his dwelling house and included "a small house lot...which has lately been occupied by Benjamin Nason."  Whether the land was where the house is today is unclear, but Ferguson family did own property nearby. Abutting property owners were R.F. Cutts, Edmond Haggens, and Jordan Goodwin, who may have been Ferguson's father-in-law.

William Hutchings, whose relation to Joseph is not known, was listed on the 1850 census as a merchant, and had married Lois Furbish of Eliot in 1846.  She died the next year of consumption, or tuberculosis, a common disease of the textile mills which caused chronic coughing and weight loss in patients. It is not known whether Lois Hutchings worked in the nearby Portsmouth Company cotton mill, but she was not alone as a victim of the disease during the late 1840s.

In 1848 William married Esther Maddox, whose family had another name that would become important in the neighborhood, after the 1880s when brothers Norris and Joseph Maddox joined their uncle, Isaac L. Moore, in running grocery stores. Moore’s store was at the corner of Factory (now Liberty) Street and Pleasant Street. Whether William and Esther Hutchings were storekeepers as well is not clear, but 1860 census shows him living in Somersworth, NH.

The next known occupants of the house were Nathan B. Martin and his family.  In 1847 he had come from New Castle, NH, to marry Louisa Linscott of Berwick, and they may have both worked at the mill.  In 1872, when the Atlas of York County shows him residing in the house, the 1870 census had listed him as a 44-year-old employee of the cotton mill, and his wife Louisa was "keeping house" and their 4-year-old daughter was "at home."

The same census record appeared to show that the Lowell family was living with the Martins.  Horatio Lowell was 25 and working in the cotton mill.  His wife Helen was 20 and "keeping house" with their 4-month old son Edward.