Humphrey Chadbourne’s substantial homestead and merchant complex in Berwick (present-day South Berwick, Maine) was an archaeological “time capsule” – rapidly abandoned after being destroyed by the Wabanaki and their French allies in King William’s War (1688-1697). Escaping the Salmon Falls raid of 1690, the Chadbournes were forced to leave almost all of their possessions behind.  Dr. Emerson “Tad” Baker, Professor of History at Salem State University, directed volunteers of the Old Berwick Historical Society and the Chadbourne Family Association in 13 seasons of excavation at the site between 1995 and 2007. The project uncovered a substantial array of finds - over 40,000 artifacts, from fancy door hardware to silver spoons and brass spurs, are now stored in the Counting House Museum, in South Berwick. 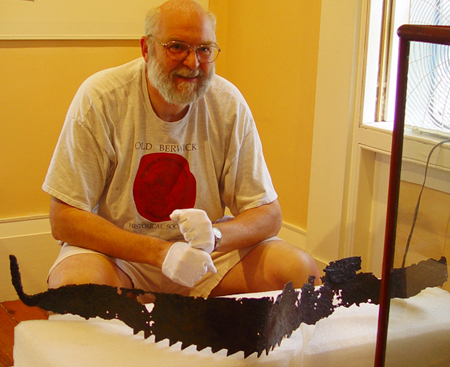 The Chadbournes belonged to the rising merchant elite of early New England. Humphrey Chadbourne Sr. migrated from Tamworth, Warwickshire, in 1634. He initially worked with his father to build and operate a saw mill for Captain John Mason on the present-day Great Works River, a tributary of the Piscataqua/Salmon Falls River. The mill soon ceased operations, but in 1643 Humphrey purchased a large tract of land from the local Wabanaki sachem, Mr. Rowls, and established himself as a merchant and fur trader. The construction of Chadbourne’s saw mill in 1652 at the confluence of the Great Works and Salmon Falls River greatly expanded his merchant operations and his wealth.
His growing prosperity was aided by a very favorable marriage. About the time he constructed his mill, Humphrey married Lucy Treworgy, a member of one of the leading merchant families of Devon, England, as well as the Piscataqua. The town of Kittery, Maine is named after the home, wharf and warehouses of Lucy’s grandfather, Alexander Shapleigh, located on Kittery Quay, in Kingsweare, Devon. Kittery Quay lies across the river Dart from the busy West Country port of Dartmouth.
Lucy’s uncle Nicholas Shapleigh, a prominent royalist, controlled the family merchant and saw mill interests in the Piscataqua. Living a few miles downriver from the Chadbournes on a large estate in present-day Eliot, Maine, Nicholas was a sometimes business partner of Humphrey Chadbourne. Numerous artifacts from the West Country are found on the Chadbourne site, suggesting the family maintained these important trade ties to home. Pottery finds include North Devon gravel tempered wares and sgraffittos, as well as Totnes ware – a rare find on early New England sites. Its presence at the Chadbourne site is explained by its manufacture in Totnes, just a few miles up the Dart from Kittery Quay. 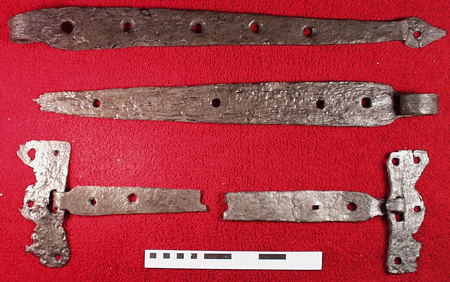 Chadbourne raised the core of his mansion house in 1664, three years before his death, when he left an estate of over £1,700, making him one of the wealthiest men in northern New England. His probate inventory confirms the archaeological evidence of a two-story hall and parlor house with rear lean-to. The structure was large and impressive, adorned with many windows, and fancy imported hardware, such as cocks head hinges. Great expense went into the windows, and hundreds of bricks were used to make two substantial chimneys. The plastered parlor must have been one of the earliest in New England, a real rarity on the Maine frontier. Sometime later, another room was added off the parlor, making for a dwelling measuring 42’x 60.’

Remarkably the Chadbourne’s substantial home was largely earthfast. The front wall of the house cellar was stoned, but the other three walls were made of wood, held in place by earth-fast posts, with some of these posts serving as structural posts for the house. While part of the lean-to had a stone footing, the rest was built with a sill laid on grade, and the lean-to chamber was constructed with wooden posts anchored directly into the ground, just like a fence post.
This house was connected to another domestic unit by a palisade and fencing, creating an enclosed compound, with central court yard.  A barn and dairy were located to the north of the compound.  A second domestic unit was perhaps occupied by servants, for when Humphrey died in 1667 his probate inventory includes five indentured servants. The homestead, barn and outbuildings sat on 400 acres and were valued at £350. Chadbourne’s saw mill, appraised at £300, stood on a waterfall nearby to the south. 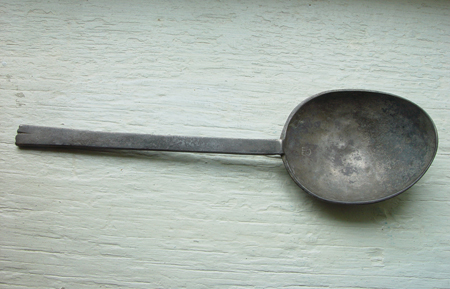 Excavations at the Chadbourne site recovered a silver spoon as well as a silver spoon handle. The complete specimen was made by the first American silversmiths, John Hull and Robert Sanderson, who engraved it with the monogram “HLC” so there would be no mistaking that it belonged to Humphrey and Lucy Chadbourne.  Silver objects show up in only a handful of other Maine estates of the era. 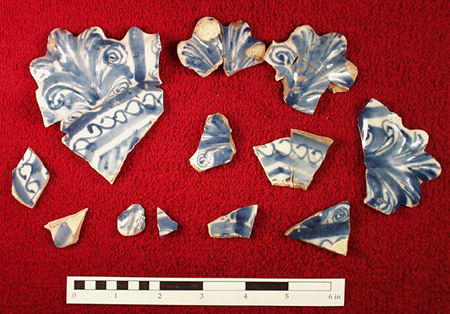 A considerable quantity of fine imported ceramics complimented the silver on the Chadbournes’ table. Excavations recovered fragments of a minimum of 20 tin-enameled vessels, as well as combed-wares, and several nice German stonewares.  Tin-enameled wares were the finest European ceramics of the day. Hand-painted in a variety of colors and finished with a shiny white glaze, they were manufactured across Europe and called delft, faience, or majolica. The Chadbournes had fancy lobed plate; Bleu Persan plate, striking and quite rare in its day, and in the height of fashion in the 1690s; and English delft plate, decorated in the Chinese Scholar pattern. 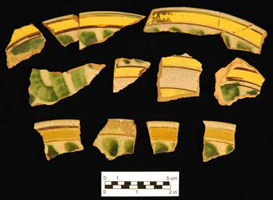 As merchants who sold lumber in the Caribbean and participated in the wider Atlantic trade, the Chadbournes also owned many non-English tablewares, including at least three different patterns of Portuguese majolica, or Lisbonware.  And while other residents of Maine owned an occasional piece of Lisbonware, no one could match the Chadbournes’ set of at least four hand-painted platas (or plates) made of Aucilla polychrome ware, manufactured in Mexico City. These are the first confirmed seventeenth-century Spanish colonial tablewares found north of the Chesapeake. Presumably acquired through the Chadbournes’ Caribbean lumber trade, the platas must have been purchased clandestinely, for it was illegal for the English to trade with the Spanish.
The Chadbournes showed their rank in their dress and adornment, in such objects as a hand mirror with an ivory handle. Excavations found three passmenterie buttons – two made with silver wound thread. Two spurs have been found, and a horse harness was decorated with a large brass Tudor rose boss, a badge of loyalty to the royalist cause of the Stuart monarchy.  At the time when streets were rare in Maine and oxen pulled plows, horses were a true luxury item.

After Humphrey's death, the house and 400 surrounding acres passed to his wife Lucy and his eldest son, Lieutenant Humphrey Chadbourne Jr., and he also inherited his father’s fine stallion.
The Tudor symbolism of the horse harness certainly would not have been missed by Lt. Chadbourne’s wife, Sarah Bolles Chadbourne, who was a descendant of King Edward I (1272-1307). Sarah’s father, Joseph, was a gentleman, born at his parent’s estate of Oberton Manor, in Nottinghamshire, and one of the few gentlemen to take up residence in Maine. Joseph had been an early immigrant, a high office holder and a leading citizen of Wells. Bolles’s daughters were probably the only young ladies in Maine of known royal descent.  Humphrey Jr.’s marriage to one of the Bolles girls bolstered the claim of gentle status for himself and his descendants. The marriage also allied him with another prominent merchant family, for Sarah’s oldest sister was married to Major Charles Frost, another of the leading magistrates and merchants in southern Maine. 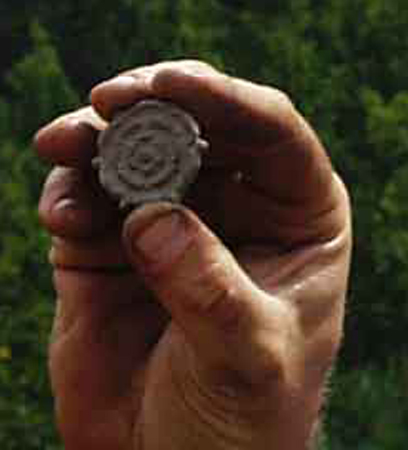 But the Wabanaki burned the entire complex in March of 1690 during the Salmon Falls raid.  In some ways, the Chadbourne house is symbolic of the young society that was evolving in Maine during the seventeenth century. It was a house and a culture built upon the rapidly acquired wealth of the frontier, with a promise of more to come, along with growing status and power. Yet, not enough care had gone into the construction of this society. By early 1692, almost all the English settlements of Maine had been abandoned with just a few hundred settlers clinging to hope in the southernmost settlements. Not until a generation of warfare ended in 1713 would people be able to return to Maine and build society anew.
(Adapted from "The Archaeology of 1690: Status and Material Life on New England’s Northern Frontier" by Emerson W. Baker, Ph.D, Salem State University, 2007.)