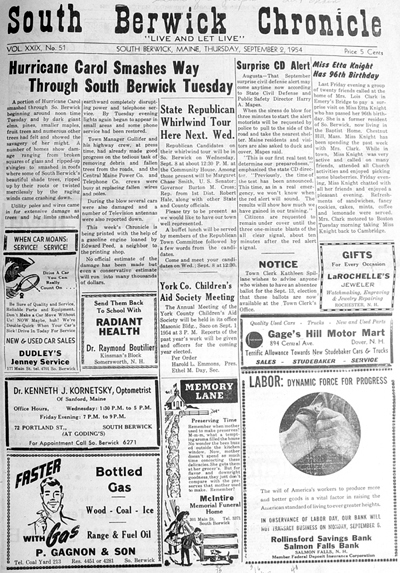 A portion of Hurricane Carol smashed through So. Berwick beginning around noontime Tuesday and by dark giant elms, pines, smaller maples, fruit trees and numerous other trees had felt and showed the savagery of her might. A number of homes show damage ranging from broken squares of glass and ripped-up shingles to smashed in roofs where some of South Berwick's beautiful shade trees, ripped up by their roots or twisted mercilessly by the raging winds came crashing down.

Utility poles and wires came in for extensive damage as trees and big limbs smashed earthward completely disrupting power and telephone service. By Tuesday evening lights again began to appear in small areas and some phone service had been restored.

Town Manager Gullifer and his highway crew, at press time, had already made good progress on the tedious task of removing debris and fallen trees from the roads, and the Central Maine Power Co. and Telephone Co. crews were busy at replacing fallen wires and poles.

During the blow several cars were also damaged and a number of Television antennas were also reported down.

This week's Chronicle is being printed with the help of a gasoline engine loaned by Edward Peed, a neighbor to the printing shop.

No official estimate of the damage has been made but even a conservative estimate will run into many thousands of dollars.