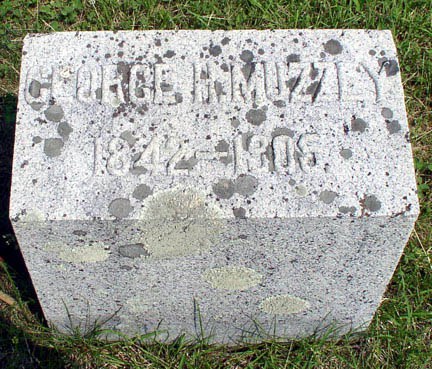 Salmon Falls Independent, February 17, 1905, from the archives of the Counting House Museum:

On Wednesday evening of last week, after eight weeks of declining health, George H. Muzzey fell quietly asleep in Jesus, to wake in that country where life immortal reigns. Mr. Muzzey was a native of Lowell, where he lived until the outbreak of the Civil War, when he enlisted in the 26 th Mass. Vols. on Sept. 30, 1861, serving one term and enlisting again on Jan. 4, 1864. He was captured by Moseby's Guerillas and confined for some months at Libby Prison. Discovering his proficiency in penmanship and accounts, he was given work in the prison office. One day,

while making out a list of 32 prisoners for exchange, it occurred to him to add his own name to the list. As he was accustomed to go to the dock to check off the names, it was easy for him to step on board the transport with the rest and thus make his escape. He was promoted to the rank of sergeant for meritorious conduct and honorably discharged Aug. 26, 1865. In 1867 he came to this town to act as bookkeeper for the Portsmouth Co. Later he became paymaster and, with the exception of a year spent in Boston, remained with them until they suspended operations in 1896.

In all the relations of life he lived as one whose soul is in tune with the heavenly anthems with never a discord or jarring note. He will long be mourned.

He is buried in Portland Street Cemetery.