In 1805, as road improvements were taking place throughout the new United States, planners laid out an improved route through the village of present-day South Berwick, Maine. Then called Berwick, it was a small hamlet lying on the major highway between Boston, Massachusetts, and Portland, Maine, a stagecoach and mail route which in those days crossed the Piscataqua/Salmon Falls at Quamphegan Landing. Led by surveyor Ichabod Goodwin, the 1805 planners called for the widening and straightening of the road, resulting in the removal of several buildings. This would have improved the navigability of the route for such traffic as ox teams carrying timber to sawmills. On this map, the Sarah Orne Jewett House is labeled "Mr. Haggens," for its owner, John Haggens (Higgins). -- Old Berwick Historical Society

Your Committee further reports that it is necessary to remove nine buildings (or parts of buildings) some standing on the present highway and others on land hereby laid out as highway, vizt. Part of a store and ancient dwelling house of Winthrop B. Norton's. Part of a store of Ichabod Butler's. The office of Benjamine Greene, Esquire. A boat builder's shop occupied by Joseph Hutchins. Part of a barn of Nathaniel Nason's. Part of a barn of Mark Lord's. A blacksmith's shop owned by Jordan Goodwin. And a shoemaker's owned by Henry Ricker.

Your committee further report, that the former watering place, with . . . . . . . . . .ly corner of Quamphegan . . . . bridge which is now enclosed, ought to be opened, as belonging to the highway, vizt. from the southwest corner of an ancient wharf on the margin of the river, to within three feet of the northerly corner of a house belonging to Ivory Hovey esqr. near said bridge. And your committee also report, that that part of the road leading from the said bridge to the landing place, and which borders on the dwelling house of Alexander McGeoch, is to be only two rods wide, agreeable to the former laying out, anything on the said plan to the contrary notwithstanding Finally. Your Committee report, that the heirs of Robert Rogers dec'd. have the term of one hundred years allowed them to take off two apple trees near their dwelling house (standing on said highway).

York s.s. In Court of General Sessions of the Peace, April term at York, 1805. The report of the Committee aforesaid, together with the plan annexed, being read, seen and understood, and no objection being made thereto, it is considered by the Court, that the same be accepted, and ordered that the same be recorded, and henceforth known for a public highway. Also ordered that the buildings and incumbrances thereon, be abated and removed. And also ordered, that the town of Berwick pay to the several persons named in said report the respective sums . . . . . by said Committee, in full of the damages by them sustained on account of said highway.

A true copy of record with the annexed plan, 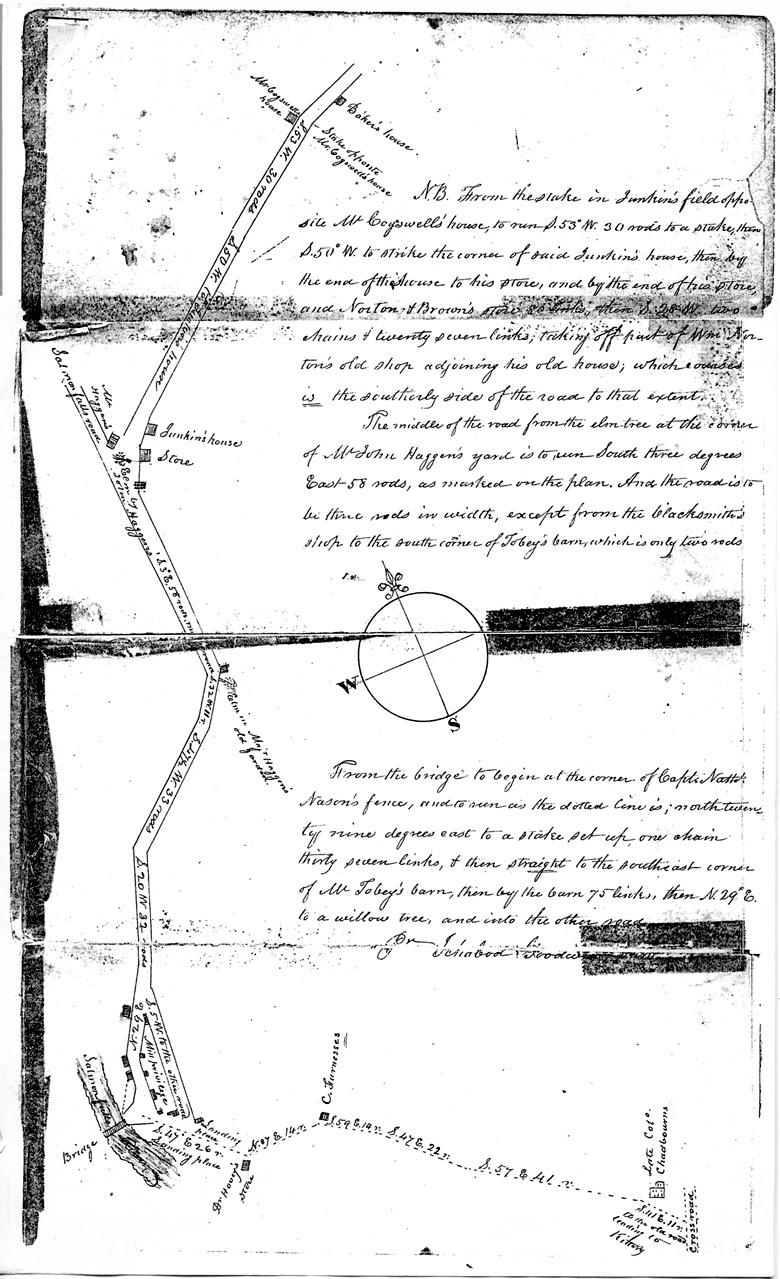 N.B. From the stake in Junkin's field opposite Mr. Cogswell's house, to run S. 53 W. 30 rods to a stake, then S., 50 W. to strike the corner of said Junkin's house, then by the end of the house to his store, and by the end of his store and Norton & Brown's . . . . . . . . chains & twenty seven links, taking off part of Wm. Norton's old shop adjoining his old house, which course is the southerly side of the road to that extent.

The middle of the road from elm tree at the corner of Mr. John Haggen's yard (the Jewett house) is to run South three degrees East 58 rods, as marked on the plan. And the road is to be three rods in width, except from the blacksmith's shop to the south corner of Tobey's barn, which is only two rods.

From the bridge to begin at the corner of Capt. Nattl. Nason's fence, and to run as the dotted line is, north twenty nine degrees east to a stake set up, one chain thirty seven links, then straight to the southeast corner of Mr. Tobey's barn, then by the barn 75 links, then N. 29 E to a willow tree, and into the other road.